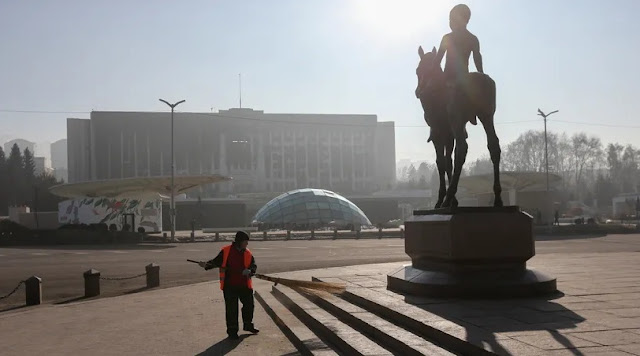 2,000 soldiers from the Russia-led military alliance supported the Kazakh regime during the protests. According to Russian sources, their mission has been accomplished.

The Russian -led military alliance CSTO has begun withdrawing its troops from  Kazakhstan. The soldiers have completed their mission and are now preparing their military equipment for loading into transport aircraft of the Russian Air Force, said the Ministry of Defense in Moscow. The emergency services would then return to their bases.

The alliance again handed over "socially important objects" to the Kazakh authorities. The airport in the economic metropolis of Almaty has also been reopened for national and international passenger traffic.

The authorities had restored control of the airport last week and used it to move military from Russia and other former Soviet republics. The state of emergency continued to apply in the city.

Thanks to Vladimir Putin

The withdrawal was announced on Tuesday and should be completed within ten days. The soldiers were bid farewell in Almaty with a solemn ceremony. The authoritarian President Kassym-Schomart Tokayev thanked the Russian head of state Vladimir Putin for the quick intervention.

The Organization of the Collective Security Treaty (CSTO), in which four other former Soviet republics are allied in addition to Russia and  Kazakhstan, had sent more than 2,000 soldiers to Kazakhstan at the request of the Kazakh President after the mass protests last week.

The alliance had helped the authoritarian ruling head of state to bring the situation back under control after the unrest.

The massive protests in the resource-rich ex-Soviet republic last week were triggered by the rise in gas prices. The protests later expanded into demonstrations critical of the government and unrest across the country.

More than 100 people were killed and hundreds injured. At least 12,000 people were arrested. Tokayev had condemned the unrest as an "attempted coup" and spoke of organized terrorist forces. However, the Kazakh authorities did not provide any evidence of this.