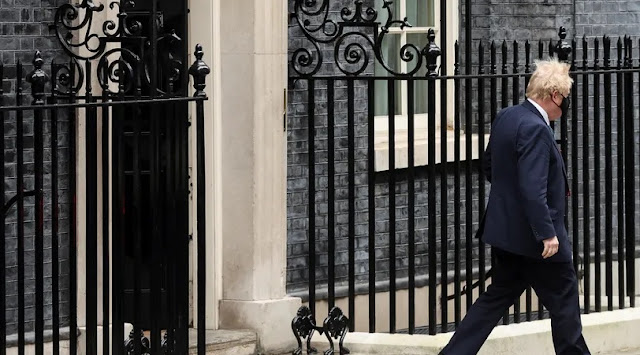 Garden parties, birthday parties and late-night drinks in lockdown put the British prime minister under pressure. He ruled out a resignation in parliament for the time being.

British Prime Minister Boris Johnson does not want to resign from office in the affair of lockdown parties. "We - and I in particular - get on with the work," Johnson said at a session of the House of Commons in London.

He knew that many wanted him gone. But he wants to continue the business of government as normal. "We made the tough decisions and we got the important points right," he said.

The prime minister is under massive pressure over allegations of having held parties at his official residence during the corona lockdown in Great Britain. If the allegations are correct, he and his guests would have violated state corona contact restrictions. An internal report by top official Sue Gray on the incidents is due to be released soon. The police in London are also investigating the alleged lockdown violations.

Possible vote of no confidence

Several suspected illegal gatherings are said to have taken place at the official residence, including several Christmas parties, a birthday party, a garden party and late-night binges before Prince Philip's funeral. Johnson is said to have partially participated or approved of the rule violations. The internal report should clarify who celebrated when, where, how often and for how long with whom.

Johnson is supposed to get the report first and then has to present it to the public a few hours later – whether in full or only in part is still an open question. If the internal report confirms a violation of the Corona rules, there could be a vote of no confidence from the conservative faction.

Around half a dozen Tory MPs have already publicly called for the Prime Minister's resignation. But many others say they want to wait for the report. If at least 15 percent of Conservative MPs - that's 54 MPs - no longer trust Johnson, he must face a vote.

Johnson has "showed nothing but contempt for the decency, honesty and respect that characterizes this country," said opposition Labor Party leader Keir Starmer. He assumes that the investigation report will be published soon and that Johnson will have to react to it "today or tomorrow".