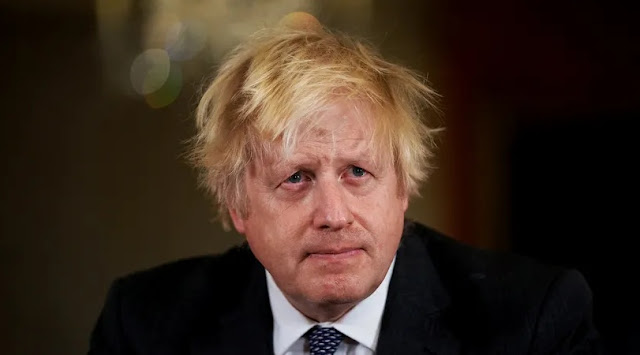 The British prime minister is trying to save his office with big announcements. But the criticism of his lockdown parties is great. Possible successors are already ready.

British Prime Minister Boris Johnson launched a counterattack. After a disastrous week in which he only half-heartedly apologized for parties in Downing Street during lockdown and growing calls for his resignation, the Prime Minister is fighting for his future.

This weekend the British media was filled with a program in which he pursued his tried-and-true strategy in times of crisis: firing the guilty and promising a golden future with bombastic announcements. In this way, the voters should forget the disasters of the past.

The well-disposed tabloid The Mail on Sundaylists the hodgepodge of the hasty emergency program: Johnson will "accept resignations" from those responsible for the chaos in Downing Street. He will reshuffle his cabinet, possibly even saw off Jacob Rees-Mogg, who is notorious for being arrogant, will end all corona measures on January 26 and announce great freedom for the country.

In addition, a "war room" will be set up in Downing Street so that he can personally manage the crisis in the NHS health system. He also wants to take the issue of the refugee boats across the English Channel from the Ministry of the Interior. In addition, his Minister Michael Gove should finally present the already belated program for the "levelling-up" that has been announced so often.

His former loyal minister, Liam Fox, pleads in the Mail on Sunday that the country will only now - after Corona - realize what real policy Johnson will implement. "We should wait with our judgement."

However, many MPs who went to their constituencies this weekend and were confronted with the anger of the public see it differently. "I've already had 1,000 emails and 80 percent of them are calling for Johnson's resignation," MP Andrew Bridgen told the Sunday Times.

More than half of Conservative Party members want Johnson out of office, according to the Conservative Home website . According to a YouGov poll , 63 percent of the public support his resignation and 41 percent support conservative voters. The Sunday Times newspaperclaims that 35 Conservative MPs have already submitted a letter calling for a vote of no confidence. With 54 such letters of protest, Johnson would have to face this vote. If he could not then unite half of the Conservative MPs behind him, his career would be over.

Party members then chose a new party leader and prime minister from among at least two candidates. However, if Johnson won the vote, he would have saved himself for at least a year. The MPs must therefore carefully calculate which majorities will form.

The problem for Johnson: According to the Sunday Times , at least seven of the previous letters of protest came from constituencies in the "red" north. These are the very constituencies Johnson has won over to his party by promising a successful Brexit from Labour. But voters feel betrayed because Johnson isn't turning out to be the "buddy" they thought he was. Rather, he seems to belong to the despised "elite", part of "those up there".

He has his apartment renovated with golden wallpaper. And while the public is in strict lockdownhad to comply, family members were not allowed to visit their dying grandparents, they were not allowed to attend funeral services together, Downing Street said "raise your cups". According to the media, Johnson even asked his employees to "let off steam" from time to time.

On Friday, the public was shocked to learn that even on the night before the funeral of the late Prince Philip, Downing Street was still partying and dancing. It was the week that official mourning had been announced in Britain and a few hours later Queen Elizabeth II mourned her husband alone in church. Not even her decades-long "Lady in Waiting" was allowed to accompany her. And more details became known. For example, a wine fridge was bought especially for the parties. On Fridays there was the "Friday-Wine Evening". Employees would have slept off their intoxication on benches in the offices.

In recent days, a group of men dressed as Johnson danced to rock music in front of government headquarters. The tweet was viewed 4.3 million times. Johnson has become the laughingstock of the public and a liability to his party.

If only he had at least apologized sincerely last Wednesday when he stood up in front of Parliament. But the British saw right away that he was pushing the blame away from himself with the legally tricky apology . A short time later, the British media write, Johnson was incensed among members of parliament about why he had to take the blame on others.

Now everyone is waiting for an investigative report from Department Clerk Sue Gray, who is tasked with investigating Partygate's violations of the rules. However, she is not an independent person, but an employee of the government. She reports directly to Johnson, who can then decide for himself what happens. He can forward her report - for a truly independent inquiry - to Lord Geidt, who has already investigated his home renovation escapades. It is already clear that Gray will probably not be able to prove any crimes.

Also because the house in Downing Street with its garden combines both office space and privacy. As it is now counted by the Daily ExpressIt's about 15 parties, Gray won't make her report this week either. Precisely for this reason, Johnson hopes that although he will be critical, he will ultimately issue a clean bill of health and he will once again survive a crisis.

But his wait-and-see behavior could be his undoing. Many MPs are willing to write a no-confidence letter, but want to see first what Gray will uncover and how Johnson will behave. If he remains ailing, a flood of protest letters could suddenly land at the party. A lot also depends on how Johnson's potential successors behave, above all Chancellor Rishi Sunak and Secretary of State Liz Truss.

Sunak was absent on Wednesday when Johnson apologized to Parliament. The Chancellor of the Exchequer had left on a side business trip to Devon in order not to send the wrong signal in the Johnson gamble. If he demonstratively supports Johnson, the scandal will rub off on him. If he shows a gesture of protest, he is accused of treason. About 46 percent of Conservative Party membersbelieve that Sunak would now be a better prime minister than Johnson. The son of an Indian immigrant family studied in Oxford and Stanford and entered politics in 2015 after working for Goldman Sachs and a hedge fund.

So far he has been a loyal follower of Johnson, supported Brexit and is trying to implement demonstratively good budgetary policy in the spirit of Margaret Thatcher. This is precisely what makes him unpopular in the north of England. People there are struggling with the rising cost of living. They don't want a Chancellor of the Exchequer who is "filthy rich" himself. Sunak's wife is the daughter of a billionaire from India. Some voters accuse him of not knowing how "normal people" think.

The second candidate to succeed Johnson seems much more down-to-earth: the current Secretary of State, Liz Truss. The 46-year-old politician comes from Leeds and her origins can be heard in her accent. She is ambitiously pursuing her career in the party, which is why she switched from an EU supporter under David Cameron to one of Johnson's campaigners for a hard Brexit. She has been Secretary of State for the Environment, Secretary of Justice, Secretary of State at the Treasury, then Secretary of Commerce and now Secretary of State. She plays the new "Iron Lady" in the spirit of Margaret Thatcher and is particularly popular within the party.

In case of doubt, the third party is happy, whoever that may be. There is still no majority among MPs who would organize a coup against Johnson. Johnson also cleaned the group of adversaries in 2019. But that doesn't have to bother Sunak and Truss. You just have to wait. In the background is Johnson's former chief adviser, Dominic Cummings, who is taking revenge for his sacking, feeding the media revelations about Johnson and already announcing on his blog that he will see Johnson off.

Even the newspaper The Daily Telegraph, which was once benevolent to Johnsonpicks up the stories. It doesn't matter what rescue program Johnson plans for himself. It is unlikely that he will lead the party to the next election in 2024. It will take a long time for a successor to regain the trust that has been lost in the government. There is not much patience left for Johnson.