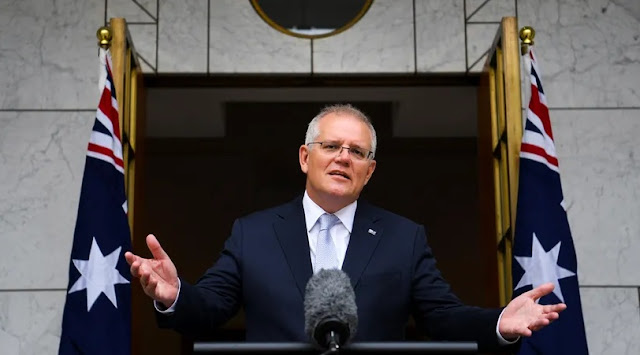 Australian Prime Minister Scott Morrison is showing toughness in the Djokovic case. His critics say: He only wants to distract from the catastrophic Covid situation in the country.

In the absurd match that is currently being played around Serbian tennis star Novak Djokovic, there could be losers in particular. For a good week, Tennis Australia, the state government in Victoria and the border authorities blamed each other for who was responsible for the debacle.

Djokovic himself, whom Australians now also call "NoVac", can no longer win, even if he is allowed to stay, according to his unclear information about trips and his positive PCR test. At the moment it seems that only one politician can score in the end: Scott Morrison, the Conservative Prime Minister who wants to be re-elected in 2022.

To understand this, one has to understand how important immigration policy is in Australia. Insular status and remoteness not only bring the continent the disadvantages of the oft-cited tyranny of distance. They can also be advantageous: For example, when wars break out elsewhere, when you want to isolate yourself from refugees, from too many immigrants, or from a pandemic.

It is not without reason that two Australian ministries are concerned with borderline issues: the Interior Ministry under Karen Andrews and the Immigration Ministry under Alex Hawke, who recently canceled Djokovic's visa again.

"We stop the boats"

Hawke is responsible for borders and immigration, citizenship, "multiculturalism" and refugee issues, Andrews more for the big picture. Nevertheless, Hawke's power is enormous: Since 1989, the powers of the respective immigration minister have been expanded again and again.

In the case of Djokovic, for example, he can decide that the anti-vaccination opponent could pose a risk , not just that he already is one. A 2017 report by the Liberty Victoria Rights Advocacy Project found that the Immigration Secretary had more personal discretion than any other minister "by an overwhelming margin".

How far these powers reach is also shown in relation to refugees and asylum seekers who are detained after their arrival. Some of these people have been hanging out for years at Melbourne's Park Hotel, where Djokovic stayed for a few days after his visa was cancelled.

Twice in Australia's recent history, conservative politicians have won elections with radical statements on refugee policy: John Howard secured a third term in office in 2001 after rejecting boat people who found refuge on the Tampa freighter with the statement: "We decide who goes into our country comes and by what means." Ten years later, Tony Abbott prevailed with his slogan "We stop the boats" - a slogan that introduced an even more rigid refugee policy, especially against boat refugees.

Now Djokovic didn't come by ship and he doesn't want to apply for asylum, but at least he knows that the current law has been interpreted in his favour. And a prime minister who can't even show a tennis star his limits? Many Australians could see that as a weakness – the last thing Morrison needs at the moment.

Meanwhile, the opposition has been reaping easy victories: Laboratory chief Anthony Albanese has been saying into every available microphone for days that Djokovic shouldn't have gotten a visa in November, the rules are perfectly clear and the situation is a "great disgrace for Australia." Labor finance politician Jim Chalmers considered the government's most recent surcharge - the second visa cancellation after four days of reflection, Friday evening shortly before closing time - to be primarily for marketing: Morrison uses the Djokovic saga exclusively to distract from other problems.

Chalmer's comment can be explained by Australia's pandemic situation: the country had been isolated for more than 18 months, the number of infections was low, and by the end of August 2021 fewer than a thousand people had died from Covid-19 diseases. Even nationals were not allowed to enter the country without a special permit.

When 90 percent of those over 16 were vaccinated, borders were opened in the east and south of the country, masks and distance rules were dropped, QR codes were abolished. Meanwhile Omicron reached the country and Scott Morrison changed his mind: Instead of stopping waves at all costs, it was now "We ride the wave". At the start of the summer holidays, that should sound casual in the land of surfers. His party friend in the most populous federal state agreed:"

A dispute that comes in handy

The number of deaths has tripled since September, there are days with 100,000 new infections - a hundred times what Australia has seen so far. The healthcare system and infrastructure are overwhelmed: people have to wait up to five days for the results of a PCR test, rapid antigen tests are sold out or are sold at exorbitant prices of 80 dollars (50 euros), the booster rate is less than 20 percent. Because so many workers are in isolation, there is a lack of staff to distribute goods in stores. In many areas, supermarket shelves are empty.

So a Djokovic dispute is actually quite convenient. He distracts from the renewed failures of the government, which, like a year ago with the excruciatingly slow procurement of vaccines, first sees what is happening and then reacts late instead of planning ahead.

The once great approval of the Covid policy has fallen. It's comfy when the limelight temporarily sheds light on another drama. Australians are obsessed with sport and they love tennis, but to a majority the Đoković visa thing sounded strange from the start.

Many of Australia's 25 million people have struggled through world-record lockdowns (262 days in Melbourne), travel bans and many restrictions, with more than 90 percent getting vaccinated as soon as they could.

And now the supply collapses and a tennis star gets an extra treat? Ironically, an unvaccinated foreigner with a special permit first writes anti-vaccination tweets and is then allowed to earn millions on the tennis court after almost two years not even relatives were allowed to travel to dying relatives? The enthusiasm is limited. Murdoch Media released a poll showing that more than 83 percent of 60,000 readers polled would like the tennis player to leave the country. Another survey sees the No Novak camp at 60 percent.

The prime minister could forgive the fact that Djokovic was granted a visa at all at the beginning. If he and his immigration minister succeed in effectively throwing Djokovic out on Sunday on "health and public order" grounds, it could give him an aura of resoluteness or strength in the eyes of many compatriots.

Still, the story will stick. And last but not least, it is a reminder of the enormous powers of the Australian immigration authorities. If Djokovic has a few hours to spare at the Park Hotel on Sunday, his roommates could surely tell him interesting things about their years of insecurity, the arbitrariness of the authorities and being in Australia without a visa.