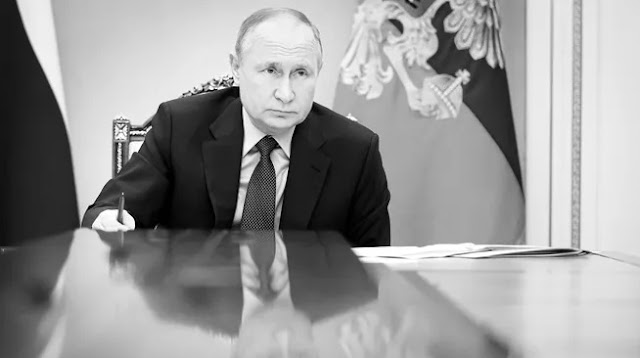 Vladimir Putin is driven by his reading of Russian history. The result is a policy that has serious consequences for Russia and Ukraine.

The Russian president recently broke the guesswork out of his Ukraine strategy with clear demands: Vladimir Putin wants NATO to "stop the eastward expansion" and for NATO to "not set up any weapons systems at Russia's borders". It is doubtful whether he will achieve this goal by deploying over a hundred thousand soldiers on the Ukrainian border. And that is why the question of his strategy remains open.

You might understand the Russian president better if you don't ask what he wants, but what drives him. One of my answers would be: the story. Putin could make Europe's future look more like yesterday than tomorrow. And that has serious consequences for Ukraine and Russia.

Vladimir Putin discovered history when he turned into a nationalist ten years ago. It was then that he began addressing Russia's "millennial past" in his speeches. A little later he attended grandiose exhibitions about fame and enemies of Russia. Then he annexed the Crimea, justifying the fact that the Crimea was as sacred to Russia as the Temple Mount was to Jerusalem. Today he draws his legitimacy from the conquest. Vladimir Putin himself made history a long time ago.

The longest-serving head of state in Europe, depending on the method of counting, is in a sense a ruling, speaking, hand-shaking, telephoning monument. He sees himself in a line spanning three centuries from Peter the Great to Catherine II and Josef Stalin to - in fact: Vladimir the Great.

Anyone who takes a different point of view is doing badly

From this follows a very specific policy that Ukraine is feeling today. Because Vladimir Putin is not only the main actor in Russian history, but also its top interpreter. His reading of the Russian past has the character of a law for the executing officials: Russia as its own civilization and conservative state, whose people stand united behind the ruler, with the imperial claim of the Soviet Union minus socialism. Anyone who takes a different point of view is doing badly.

This week the Russian judiciary continued the trial of the history society and the human rights association Memorial. Even before the judges announce their decision, Putin has already given the direction of march. In a recent speech he accused Memorial of protecting extremist organizations. They also recognized three people as victims of Stalinism who shot Jews.

The trial against Memorial can also be explained by the competition between historical interpretations. Memorial has set itself the task of coming to terms with the crimes of Soviet socialism, especially those of the Stalin era. Putin sees it as an era with unnecessarily many victims, but also as Russia's rise to world power. Memorial was created during the opening of the Soviet Union at the end of the 1980s. Putin sees the collapse of the Soviet empire as the greatest geopolitical catastrophe of the 20th century. Memorial wants to defend human rights, Putin sees human rights as a Western tool to undermine his rule.

Memorial keeps a memory alive that Putin wants to forget. For Memorial, history is an open discursive cognitive work, for Putin a managed state affair. Its quasi-biblical principle is: I am your president, your chief historian, you shouldn't have other historians besides me. Memorial violates this requirement.

With soldiers if necessary

Putin also views Ukraine from this metaphysical level. And not as an independent political subject, but as a historical object of Russian history. In an essay in July 2021, he revealed his emotional view of the neighbor. "We are one people", he wrote about Russians and Ukrainians, "a united whole". But the West has turned Ukraine into a "deployment zone against Russia", even an "Anti-Russia" project. Putin ignores both the development of the Ukrainian national movement since the 19th century and the independent state since 1991. In his view, Ukraine remains an integral part of Russian imperial history.

That is what Putin is doing. And it shows what he wants: to prevent a Ukraine that is a nation-state independent of Russia, that is drawing closer to the European Union, that is arming itself against a Russian attack with Turkish drones and American anti-tank weapons.

There is a lot to suggest that he would rather thwart this development sooner rather than later. With soldiers if necessary.