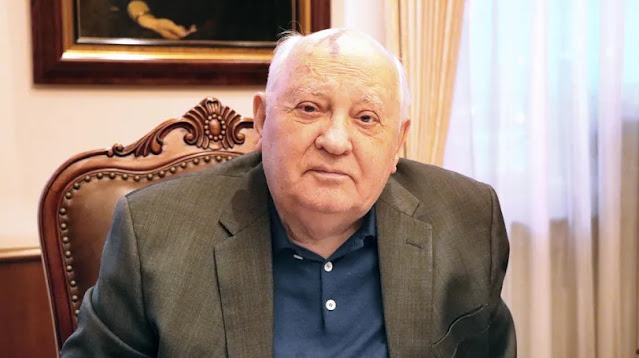 Former Soviet President Mikhail Gorbachev has accused the United States of behaving arrogantly after the end of the Cold War. After the collapse of the Soviet Union in 1991, there was "a triumphant mood in the West, especially in the USA," said Gorbachev in an interview published on Friday with the Russian news agency Ria Novosti.

This Saturday marks the 30th anniversary of Gorbachev's resignation as President of the Soviet Union. The now 90-year-old resigned from office on December 25, 1991, thus sealing the end of the USSR."How can you rely on equal relations when the United States and the West are in such a position?" Criticized Gorbachev in the interview.

After the collapse of the Soviet Union, the West appeared "arrogant and self-righteous": "You declared yourself the winner of the Cold War." As the “winner”, the West decided to build a “new empire”. This has led to the expansion of NATO.

Gorbachev spoke against the background of increasing tensions between Russia and the West due to the unclear situation in the border area with Ukraine . Russia has deployed troops there. This fuels fears that Russia could attack its smaller neighbor.

The Russian government rejects the fears of the West and in turn accuses Ukraine and NATO of provocative behavior. Russian President Vladimir Putin recently demanded written security guarantees from the United States and the Western defense alliance, including NATO's renouncement of Ukraine's membership. Putin said any expansion of NATO eastward would be unacceptable to Russia. At the same time he warned the West against "tricks" in the negotiations.

Meanwhile, high-ranking representatives of Germany and Russia have announced that they will meet in early January to discuss the Ukraine conflict.

A representative of the White House also said that the US would be ready for a diplomatic exchange "from the beginning of January". Putin described the US's initial reaction to Thursday's demands as positive.