USA: Hundreds Of Houses Destroyed And 33,000 People With Evacuation Order 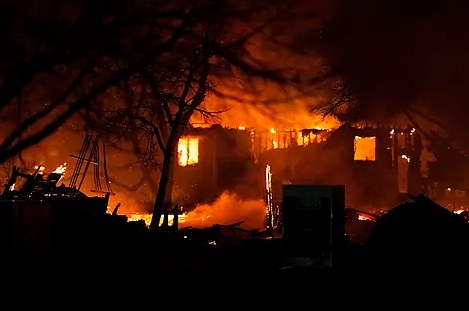 The region faces a historic drought coupled with strong winds.

Hundreds of houses were destroyed and at least 33,000 people were ordered to evacuate due to a fire in Colorado (western United States), a region facing a historic drought coupled with strong winds, according to authorities.

In Boulder County, hotels, shopping centers and more than 650 hectares of vegetation were consumed by the flames. "We know that approximately 370 houses in Sagamore were destroyed. There are another 210 houses that may have been lost in Old Town Superior," Boulder County Sheriff Joe Pelle said at a news conference.

An area of ​​more than 6 km2 was engulfed by flames in Boulder County, where about 100,000 people live, and authorities warn that the fire is advancing in inhabited and commercial areas. "I want to emphasize that due to the magnitude and intensity of this fire and it occurs in a highly populated area, it would not be surprising if there were injuries or deaths, " said Pelle, who specified that a store and a hotel complex were consumed by the flames.

The newspaper 'The Colorado Sun' reported that several wounded with burns have been treated in hospitals in the area. CBS footage shows what appears to be a burning apartment complex as firefighters attempt to put out the fire. A video on Twitter shows smoke and fire reaching a store parking lot and setting trees and grass ablaze.

Thousands of people received an evacuation alert to flee the flames believed to have been unleashed by power poles collapsed by high winds. Colorado faces a historic drought, which facilitates the spread of flames. And wind gusts reached 160 km / h in some areas, making it difficult for firefighters to do their job.

The winds should subside, according to the national meteorological service, and snow is expected to fall in the next few hours. Patrick Kilbride, 72, was working in a hardware store when he learned of the evacuation order, according to the Denver Post.

He ran home to collect his things but could save nothing but his car and the clothes he was wearing. His dog and cat died. "Just ashes," he said of the home in which he lived for three decades. "It is no longer a house. If you need a fireplace, it is all that remains," he told the newspaper. "What a strange feeling to have everything to make your life comfortable to have nothing," he added.

A total of 33,000 people were ordered to evacuate between Louisville, a town of 20,000 inhabitants, and Superior, with 13,000 inhabitants. The National Meteorological Service affirmed that it is a situation "that is putting lives in danger." Patti Holtz described the terror of leaving her home in Boulder, about 50 km from Denver, the capital of Colorado. " Everything was on fire," he said. "There are embers everywhere. So I'm very scared, of course, with the wind. (...) It was so dark that you can't see anything. It's like the black of night," he described.

Colorado Governor Jared Polis declared a state of emergency and indicated that it was a "devastating" fire. Like previous fires in the state, this one is advancing in residential areas and not in the countryside. "This area [on fire] is around and within suburban settlements, shops," he explained.

Like much of the western United States, Colorado experienced years of drought that has left the area parched and vulnerable to wildfires. Although fires are a natural part of the climate cycle, helping to clear vegetation, their scale and intensity is increasing.

Scientists warn that climate change, largely driven by human activities such as the indiscriminate burning of fossil fuels, is altering weather patterns.

This prolongs droughts in several areas and causes unusual out-of-season storms in other regions, a phenomenon that is expected to worsen as temperatures around the world continue to rise.

Daniel Swain, a meteorologist at the University of California, tweeted that it is "hard to believe" that these fires occur in December , when they are not usually recorded. "But if we take a warm and dry fall, with only 2.5 cm of snow so far this season, and add an extreme windstorm ... the result is extremely fast and dangerous fires," he concluded.