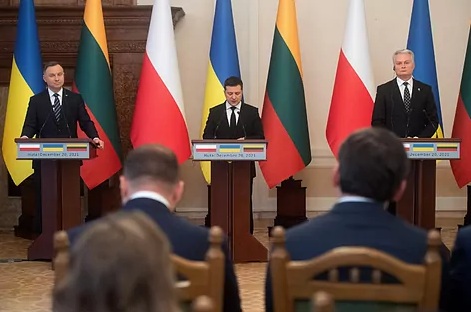 Lithuania and Poland once again back Kiev's aspirations to join the European Union and NATO, something Russia opposes.

Ukraine, Lithuania and Poland, three of the EU countries closest to Russia, joined their voices yesterday to ask for more support in the face of pressure from Moscow and its satellites. Ukrainian President Volodimir Zelensky recalled that "we have many times perceived intimidation [from Russia] to move its nuclear weapons to different parts of the world: about the deployment of nuclear weapons in the temporarily occupied territory of Crimea, and now we hear information about Belarus. I think you can not play with those things."

Belarus had 81 warheads on its territory after the collapse of the Soviet Union in 1991. All were transferred to Russia in 1996. Following last year's street riots, the Belarusian regime has moved closer to Moscow, which has long had ambitions to expand its military presence in its neighboring country.

"We must do everything possible to prevent a Russian attack against Ukraine," said Polish President Andrzej Duda at the joint press conference with Zelensky and Lithuanian leader Gitanas Nauseda. The three leaders met within the framework of the Lublin Triangle, established in July 2020 by the foreign ministers of Ukraine, Poland and Lithuania.

Lithuania and Poland again endorsed Kiev's aspirations to join the European Union and NATO, something that Russia is categorically opposed to., which has now demanded that the US not help Ukraine militarily and keep NATO forces away from the Russian border.

The leaders of Poland and Lithuania see "unacceptable" the Russian proposal on security guarantees in Europe, which aims to prevent Ukraine from entering the Atlantic alliance in the future.

"Ukraine's security is a fundamental issue," said Duda, adding that the West should not make "concessions to Russia," because "when ultimatums are accepted from a country with great military potential, that leads to military aggression by from that State and to war".

Among the priorities of the Lublin format are the consolidation of the region, the improvement of security, the integration of Ukraine into the EU and NATO, the development of economic cooperation and the joint fight against "hybrid threats".

Since the annexation of Crimea in 2014, all three countries have placed Russia as the top security issue on their agendas. Nauseda insisted that "there will be serious consequences" for Moscow if it tries to impose its "red lines" on independent countries.