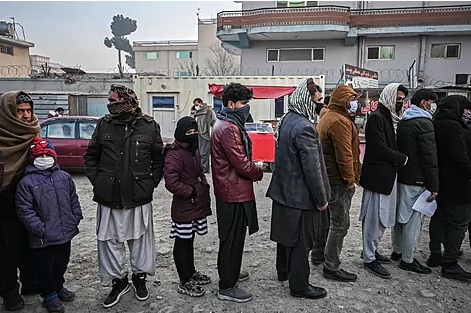 Had it been successful, the attack could have sparked a bloodbath. A witness said that several people were injured.

The security forces of the Taliban government have killed a man bomb this past Thursday at noon -local time-. According to the tale of the Taliban, a suicide bomber, loaded with a belt of explosives, approached the long line that, since last weekend, hundreds of Afghans have been carrying out in front of the Kabul passport issuing office. Although the attack was supposedly aborted, the number of victims that the attack could have caused is unknown.

Several Afghan media reported an explosion of remarkable magnitude in the Afghan capital. For its part, a spokesman for the Interior Ministry - controlled by the Taliban - assured that the attacker was "eliminated" by security personnel. "No one was killed or injured," he added, in a trill posted on the social network Twitter. A witness, a member of the Taliban, assured Reuters that multiple people were injured, and that the area had been cordoned off after the assassination attempt.

If successful, the attack, whose responsibility has not been disclosed, could have caused a bloodbath similar to the one that took place at the gates of Kabul International Airport on August 26.

On that occasion, the attacker blew himself up right in the middle of the crowd of desperate people trying to reach the runway to be evacuated on one of the flights arranged by the international forces still present in the capital. At least 183 people died.

The Islamic State in Khorasan, the local branch of the organization founded by Abu Bakr Baghdadi, claimed responsibility for the massacre, declaring war on the new Taliban government.

Since then, their attacks have not stopped, putting the country's new lords in check and questioning the effectiveness of its security forces.

There have been many Fridays that have been dyed red by suicide attacks on mosques, especially those belonging to the Shiite Hazara minority.