Stand News: The Closure Of The Newspaper 'Stand News' Deals Another Blow To Press Freedom In Hong Kong 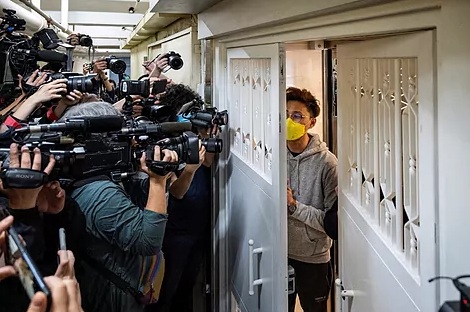 It is the second Hong Kong outlet closed after a police raid and facing charges of sedition after the 'Apple Daily'.

After more than 200 uniformed and plainclothes officers searched the newsroom and detained seven of its employees, the Hong Kong pro-democracy outlet 'Stand News' announced its closure on Wednesday, in one more example of the constant suffocation of freedom press in the region. It is the second Hong Kong newspaper to cease its activity after a police raid after the 'Apple Daily' case.

Early in the morning, the media reported through its Facebook account that the police were conducting raids on the homes of several officials of the newspaper. This is the case of the editor of 'Stand News' and president of the Hong Kong Journalists Association, Ronson Chan, who, although he was not arrested, was questioned at the police station and is accused - like those arrested - of the crime of "conspiring" to issue "a seditious publication."

"Stand News has always professionally reported the news, this is beyond question," Chan told reporters. "Criminal charges will not change this," he added.

Among those arrested are several senior officials, such as the director of the newspaper, Lam Shiu-tung; his predecessor, Chung Pui-kuen, who left the leadership in November, and the pop star and activist Denise Ho Wan, a former board member and one of the most recognizable faces of dissent. The editor-in-chief of 'Stand News', Patrick Lam, was taken handcuffed out of the building where the newsroom is located, according to an AFP journalist.

Also arrested were Christine Fang, Chow Tat-chi and lawyer Margaret Ng, who was sentenced to one year in prison last April for participating in the 2019 pro-democracy protests. It was as a result of these demonstrations that Beijing promoted the current law in 2020. of national security, which has served as a pretext to arrest and imprison opponents.

Hours after reporting the arrests, the media published another statement on said social network in which it stated that the agents "confiscated several computers and documents" in the office, located in the Kwun Tong district, and announced the closure and dismissal of your employees.

"Due to the current situation, 'Stand News' will stop operating immediately and will stop updating its website and social networks, which will be removed in one day. Acting editor-in-chief Lin Shaotong has resigned and all employees have been laid off. immediately", reads the text.

Nominated in November for the Freedom of the Press award in the Independence category of Reporters Without Borders, the newspaper was born in 2014 as a non-profit digital medium. "'Stand News' was editorially independent and dedicated to protecting Hong Kong's core values ​​such as democracy, human rights, freedom and the role of law and justice," the statement recalled.

This latest silencing of the press comes half a year after the closure of the 'Apple Daily', which was the largest pro-democracy and Beijing-critical head of the city. Last June, it announced its closure, days after the raid on the office and after the freezing of assets and the arrest of its owner, magnate Jimmy Lai, along with four other executives, for "conspiring with foreign forces", a crime typified in the security law imposed by China.

On June 17, the newspaper itself broadcast the police raid on the office live on Facebook. A hundred agents entering the newsroom, searching drawers and looking for information on the journalists' computers while the employees were taken to the basement of the building to stop recording.

Lai, in prison since last December for "fraud" and "conspiracy with foreign powers", appeared in court on Tuesday, after being recently charged - along with six other former direct members of the closed middle - of "conspiring" to "print, publish, sell and exhibit seditious publications ", according to the newspaper 'Hong Kong Free Press'.

The magnate has been adding convictions throughout this year. Among them, a recent one for participating in an unauthorized vigil in 2020 for the Tiananmen massacre, for which he has been sentenced to another 13 months in prison.