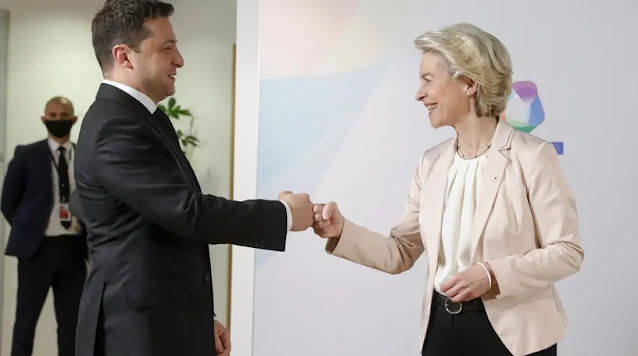 Under pressure from Russia, the EU is again taking care of its Eastern European partners. But it also becomes clear that there is no prospect of membership.

One is missing. Between Finland and Estonia a space remains empty, and a chair is no longer needed there either. Only a lonely flag and a name tag with the inscription "Belarus" symbolically indicate which country should be represented here.

One that is "missed" in this group, as Council President Charles Michel says in his short opening speech.

On Wednesday, the heads of state and government of the EU member states and their so-called Eastern Partnership met for a summit in Brussels. These include Ukraine, Georgia and Moldova, but also Armenia and Azerbaijan. And actually Belarus too. But after the fraudulent 2020 election and the forced landing of a foreign plane in Minsk, during which an opposition member was arrested, the EU imposed severe sanctions on the ruler Alexander Lukashenko and his entourage. Since then, the country has said goodbye to the group of eastern partners. With his recent attempt to blackmail the EU by sending refugees to the Polish-Belarusian border, Lukashenko has finally made himself the number one enemy of the Union.

Belarus is the extreme case of a failed rapprochement. But the EU is not really satisfied with the development of the other five countries either. It could need stability in the region right now, as Russia is more or less openly threatening war - and not just Ukraine, but indirectly all of Europe.

"The EU's enlargement and neighborhood policy is in a crisis," says Eastern Europe expert Stefan Meister from the German Society for Foreign Policy (DGAP). Russia is putting pressure on its eastern neighbors to turn away from the west. "And in the populations, for example in Ukraine or Georgia, there is growing frustration that the EU is not getting more involved." What could follow from this in the long term: The fewer prospects the EU offers its eastern neighbors, the easier it is for other powers to exert influence. Above all Russia.

That was exactly what they wanted to avoid. When the European Union launched the Eastern Partnership program in 2009, the strategy behind it seemed as simple as it was promising: Connections versus reforms . We are increasingly trading with you and also supporting you financially, in return you are modernizing your democracies, fighting corruption and moving closer to us, was the EU's plan.

That sounded like a win-win situation. Mutual entanglement, both economically and politically, would also have meant mutual dependence. Partnership as a guarantee of stability. Only reality has turned out to be more complicated than it seemed twelve years ago.

On the one hand, there was Vladimir Putin, who was provoked by the EU's efforts to integrate and whose ideologically tinged expansionist urge only a few years later resulted in the annexation of Crimea, which is contrary to international law. Both seemed to have been underestimated in the West. And there were the partner states themselves, whose feelings of belonging to Europe and thus their corresponding efforts were quite different.

In the case of the authoritarian oil state Azerbaijan, this is less surprising. But even in decidedly pro-European states such as Georgia or Ukraine, the democratic transformation has not turned out to be as sustainable as one would have liked on the Brussels side. And the harder Russia tries to re-bind the region to itself with military pressure, the more fragile the progress that has already been made seems.

None of this speaks against the Eastern Partnership project itself. And yet DGAP expert Meister sees a chronic problem for the EU here: only dealing with crises when they are there. "The fact that Russia can open up such a threat scenario is the consequence of a suppressed reality," says Meister. "One should not only have paid attention to the strengthening of democracy and the economic integration of the Eastern partner countries, but also had to keep an eye on their ability to defend themselves."

Admittedly, a tough security policy is not necessarily a task of the EU's neighborhood policy. From Meister's point of view, there would have been ways to do it better, or at least to be better prepared: "Energy security is also a security policy, because it reduces the potential for blackmail by Russia." This is not just about Nord Stream 2. The connection to the European electricity market via so-called interconnectors, for example between Moldova and Romania, should have worked better a long time ago, criticizes Meister.

The final paper of the summit on Wednesday speaks of this, as well as a lot of money for renewed roads, youth exchange programs and small and medium-sized businesses. Moldova will receive additional financial aid of 60 million euros to mitigate the effects of rising gas prices on the country. But doesn't it take more than money and words to actually deepen mutual relationships?

As much as the Eastern Partnership was about bringing the neighboring states closer to the EU, which was again the prevailing narrative at this summit: this is not the approach. Neighbors remain neighbors and not roommates. Ukraine in particular still firmly hopes to one day become an EU member state - the one step that, one could argue, will complete the transformation to a European democracy.

Nothing that points to the prospect of accession

But the EU does not seem to want to fulfill this hope, especially since one hears more and more of the thought that the admission of countries like Hungary or Poland could have been too hasty. When EU Commission President Ursula von der Leyen and Council President Charles Michel appeared in front of the press on Wednesday evening and presented the summit's final declaration, even with a lot of optimism, nothing could be heard between the lines that would point to the prospect of accession.

It is conceivable that in 2009 even more serious intentions to integrate the six neighbors were pursued. But now, after Russia's invasion of eastern Ukraine and the complete disinhibition of the Lukashenko regime, not to mention the erosion of our own cohesion in the dispute over the rule of law, such questions have slipped down again from Brussels' point of view. The noise of the present is louder than the music of the future.

The fact that the Eastern Partnership is really "the most important part of our foreign policy" at the moment, as EU Foreign Affairs Representative Josep Borrell recently said , firstly appears doubtful in this light and secondly comes very late. The last summit of the Eastern Partnership was four years ago and large European states in particular - such as Germany and France - have so far shown a rather sluggish interest in the East.

The question now is to what extent this will change. Even the change of government in Germany so far does not suggest anything in this direction; Instead, it crashed more clearly than ever between Kiev and Berlin, because the old federal government not only did not want to deliver weapons, but is also said to have actively opposed the US doing this. However, pressure on Olaf Scholz not to allow Nord Stream 2 to go into operation is also increasing from other countries and not least because of ambiguous statements by his own Foreign Minister Annalena Baerbock.

Ukraine has formally teamed up in a trio with Moldova and Georgia to increase pressure on the EU. One would like tangible guarantees: protection against Russia on the one hand, concrete promises to join the EU on the other. They didn't get either of these at this summit either. Above all, arming Ukraine, as it vehemently demands, is out of the question from a pan-European perspective. Help with cyber defense, on the other hand, is all the more preferred.

"Prosperity and security go hand in hand," says Charles Michel in conclusion. In retrospect, can that really be the lesson from the past twelve years? And when von der Leyen spoke about the Normandy format, she emphasized that it was about two conflicting parties, namely Ukraine and Russia. It's only a semitone on the diplomatic keyboard, but it has the potential to be grossly upset. In such a framework, one cannot say much more clearly: "First and foremost, this is your problem, not ours."

The meeting of EU heads of state and government continues this Thursday - without the partners from the East, but with two new Federal Chancellors from Berlin and Vienna. Vladimir Putin will continue to sit in the room as an invisible guest, not only because it will once again be about Nord Stream 2 and the energy price crisis. Not a pleasant debut for Scholz, more like a geopolitical marmot day.

And possibly Putin doesn't have to fear from this round any more than the Eastern partner countries could hope for: Von der Leyen and Michel emphasized again and again on Wednesday evening that one would react with all severity if Russia intensified its aggression against Ukraine. That should mean: But only then, not preventively. Obviously, the EU continues to pursue the strategy of reacting to crises of this kind only when they are there.