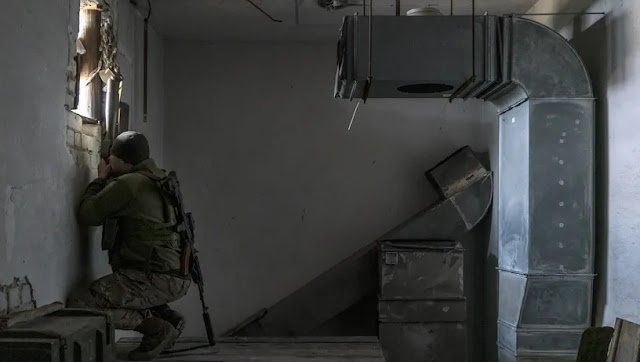 According to NATO knowledge, Russia is continuing its troop movements on the border with Ukraine. There are no signs that the military build-up will stop or slow down, said NATO Secretary General Jens Stoltenberg on the sidelines of a meeting with Ukrainian President Volodymyr Selenskyj in Brussels. "The opposite is the case, it goes on."

Stoltenberg called the Russian approach unjustified, provocative and destabilizing. They call for a return to diplomacy and de-escalation. NATO is ready to talk to Russia. Any further Russian aggression against Ukraine will have serious consequences and a high price, said Stoltenberg.

The NATO Secretary General rejected Russia's call to rule out Ukraine's possible accession to the military alliance: "We will not compromise when it comes to Ukraine's right to choose its own path," said Stoltenberg. Ukraine is a close partner of NATO and this cooperation is important for both sides. The partnership is defensive in nature and in no way poses a threat to Russia, said Stoltenberg, describing Russia as an "aggressor".

Accession of Ukraine and Georgia to NATO is currently not an option in the short or medium term. Ukraine in particular cooperates closely with the West, especially with the USA.

Russia is ready to start negotiations

Russia vehemently rejects NATO expansion to the east. The government in Moscow asked NATO on Friday to formally put aside the prospects of Ukraine and Georgia joining the Western military alliance. The official withdrawal of a corresponding decision at a NATO summit in 2008 was "in the fundamental interest of European security," said the Russian Foreign Ministry.

According to the Russian government, Deputy Foreign Minister Sergei Ryabkov is ready to start negotiations immediately. Ryabkov could leave for talks in a neutral country at any time, said Kremlin spokesman Dmitri Peskov. After last week's video conference, Russian President Vladimir Putin may call US President Joe Biden again before the end of the year to discuss the security issue, Peskov said. Such a phone call has not yet been agreed.

According to NATO findings, Russia has concentrated between 75,000 and 100,000 soldiers in areas close to the Ukrainian border. A similar development as in 2014 is feared at NATO and in the EU: At that time, after the Euromaidan protests and the overthrow of the then President Viktor Yanukovych, Russia annexed the Ukrainian peninsula of Crimea and started supporting separatists in eastern Ukraine, which is still ongoing.

The tensions with Russia are also one of the central topics at the EU summit in Brussels: while the Baltic states and Poland criticized the German-Russian pipeline project Nord Stream 2 and called for sanctions against Russia, Luxembourg and Austria, for example, spoke out in favor of more dialogue with the government in Moscow. Germany's new Chancellor Olaf Scholz (SPD) announced firm support for Ukraine, but initially remained vague about concrete steps.

The EU will do everything for Ukraine "so that the inviolability of the border remains," said Scholz at his first regular EU summit. A draft for the joint summit declaration speaks of clear consequences should Russia attack Ukraine. EU foreign policy chief Josep Borrell warned that an attack would entail higher political and economic costs than the sanctions imposed after the annexation of Crimea in 2014.

EU threatens Russia with consequences if it attacks Ukraine

The EU countries have announced sanctions by Russia in the event of aggression. Because of the spread of omicrons, the heads of state are pushing for booster vaccinations.

The European heads of state and government have threatened Russia with "massive consequences" in the event of an attack on Ukraine . Continued military aggression will result in harsh sanctions, according to a statement published at the EU summit in Brussels. Chancellor Olaf Scholz (SPD) sided with Ukraine at the beginning of his first regular summit.

In the declaration, the 27 member states affirmed their "full support for the sovereignty of Ukraine and the inviolability of their national territory". The exact sanctions were not disclosed. However, they should be coordinated closely with partners such as the USA and Great Britain.

Nord Stream 2 as a means of pressure

Ukraine, but also EU countries such as Poland, Lithuania and Latvia, are calling on Germany to use the Nord Stream 2 Baltic Sea pipeline as a means of pressure against Russia . The Latvian Prime Minister Krisjanis Karins accused Russian President Vladimir Putin of using the natural gas pipeline to "blackmail" the EU.

Finland's Prime Minister Sanna Marin rejected a link between Nord Stream 2 and the Ukraine issue: It was important "to keep energy policy out of the conflict," she said.

Austria's Chancellor Karl Nehammer had previously spoken out in favor of rapid commissioning of the recently completed Baltic Sea pipeline - in addition to Germany, Austria also depends on Russian natural gas. The German Federal Network Agency, as the responsible inspection body, has since announced that for formal reasons it will not be able to issue approval before the second half of 2022. After that, the EU Commission also has to examine the project.

In a non-binding resolution, the European Parliament also called for the abandonment of Nord Stream 2. In addition, the parliament demanded sanctions against senior Russian military personnel and "the oligarchs in the vicinity of the Russian President" Vladimir Putin as well as the exclusion of Russia from the international payment system Swift.

The heads of state and government of the EU also called on the authoritarian government in Belarus to "release all political prisoners immediately and unconditionally". The husband of the Belarusian opposition leader Svetlana Tichanovskaya was sentenced to 18 years in prison this week.

The summit participants also followed appeals from French President Emmanuel Macron , saying that the EU wanted to "take more responsibility for its own security" and "increase its ability to act independently". As a consequence of the chaotic Afghanistan withdrawal, a "strategic compass" is to be adopted at a summit under Macron's presidency in March.

The summit consultations in Brussels also dealt with the highly contagious Corona variant Omikron . The 27 countries named booster vaccinations "urgent". In contrast, there was no sign of a Europe-wide vaccination requirement. Germany and Austria want to go ahead alone for the time being.

Clear differences became clear again on the subject of energy: Some Eastern countries are therefore questioning EU trade in pollution rights. Germany, on the other hand, sees this as a "solution" and not as part of the problem.