Putin And Biden Ease The Tension 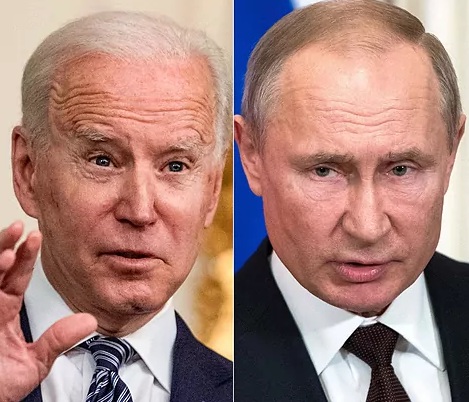 The telephone conversation between the two is considered the prelude to the meetings between Russia and the United States in Geneva on January 10.

Russian President Vladimir Putin told his US counterpart, Joe Biden, that Russia wants security "guarantees" and that if it continues to deploy missiles in Central Europe, Moscow will react the same way Washington would if it did offensive weapons. were placed near its borders.

It was a 50-minute call in which Biden made it clear that the US and its allies and partners will respond decisively if Russia invades Ukraine again. "President Biden urged Russia to reduce tensions" in Kiev, said the spokesman for the White House, Jen Psaki, said in a statement.

Washington has been warning since November about Russian troop movements near Ukraine, accusing Russia of planning an invasion of its neighbor. Moscow has denied the accusation but has launched a campaign for the West to accept the ambitious security demands it made earlier this month: that NATO should not admit new members and that the United States cannot establish more military bases in the former Soviet republics.

The reaction from NATO leaders so far has been negative, but Biden has yet to speak clearly on the issue in public. Moscow claimed this week that it had withdrawn 10,000 soldiers from maneuvers in the west of the country, near Ukraine. But intelligence officials in several Western countries say there has been no significant pullback of Russian troops or equipment from the border, according to The New York Times.

During the telephone conversation, organized at the initiative of Moscow, Putin told his American counterpart, Joe Biden, that new Western sanctions against Moscow could sever ties between Russia and the United States and that in any case they would be a big mistake, according to a summary. Issued last night by the Kremlin: It could have implications for talks on gun control, cybersecurity, climate change and other issues that the United States wants to address with Russia. Kremlin aide Yuri Ushakov said that in any case Russia was satisfied with the telephone conversation which, according to the Russian version, focused precisely on the security guarantees that Moscow wants from the West.

According to the White House, Biden expressly bet on diplomacy, which will have a new opportunity early next year. Negotiations on security guarantees will take place in three places: in Geneva (Russia-USA), Vienna (OSCE) and Brussels (NATO). The two leaders agreed to stay in contact during the negotiations and to directly supervise the bilateral talks. The Russian leader denies having plans to attack Ukraine and blames NATO for the current military tension due to its expansion ever closer to Russian territory. But Putin has not put concessions on the table in exchange for the military and political constraints he would like to impose on the NATO countries and Ukraine.

According to a senior US administration official, the tone of the call was "serious and substantive," and both leaders saw the possibility of "significant progress" in some areas, although they also noted that there are others in which "it is impossible to achieve. a deal," said the Financial Times.

The telephone conversation between the two is considered the prelude to the meetings between Russia and the United States in Geneva on January 10. A meeting between Moscow and NATO is scheduled for January 12, followed by another summit on January 13 in which Russia, the US and other European countries will participate. Moscow will send its deputy foreign and defense ministers.

Three weeks ago there was a video conference between the two leaders in which Biden warned that he would respond to a possible Russian attack on Ukraine "with strong economic measures" that could include the suspension of the Russian Nord Stream 2 gas pipeline, built to transport gas from Russia to German territory.