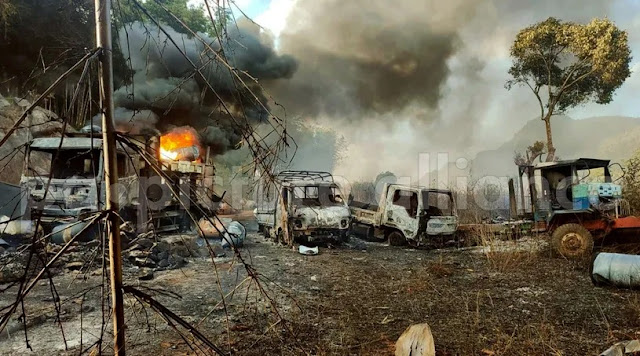 In the east of the country, the military is said to have killed and burned members of the Karenni minority. Two Save the Children employees have been missing since then.

The remains of more than 30 people have been found in eastern Myanmar , according to reports from human rights groups. The people, including the elderly, women and children, are said to have been killed and then burned.

According to the human rights group Karenni Human Rights, the victims are civilians who tried to flee their villages in Kayah state because of fighting. The Karenni are an ethnic group in the multi-ethnic state of Myanmar.

The NGO said it found the bodies near the village of Mo So in the Hpruso municipality. A representative of the People's Defense Forces rebel group (PDF), which is fighting the military junta, also said that their fighters had found the vehicles with the bodies in the municipality of Hpruso in the eastern state of Kayah.

At the same time, the international aid organization Save the Children announced that two of its employees were missing after the incident. They were on their way home after a humanitarian operation nearby. They have confirmation that their private car has been attacked and burned out.

Save the Children spoke of at least 38 deaths in the Mo So incident. "The military has reportedly forced people out of their cars, arrested some, killed others and burned their bodies," it said. The organization condemned the attack as a breach of international humanitarian law.

However, the military- controlled newspaper The Mirror Daily reported that fighting broke out between military personnel and local resistance fighters in the Hpruso community on Friday. Seven trucks with "terrorists", as the military calls the local resistance forces, were shot at. A junta spokesman said there were clashes in Hpruso on Friday after soldiers tried to stop seven "suspicious" cars. Several people were killed, the spokesman said without giving details.

All of these reports cannot be independently verified. The Myanmar Witness organization, which claims to be collecting evidence of human rights violations in the country, confirmed a fire on Friday at 1:18 p.m. local time, but did not give the cause.

The former Burma has been plunging into chaos and violence since a coup in February. The military had ousted the de facto head of government Aung San Suu Kyi and has ruled with an iron fist ever since. Any resistance is suppressed with brutal severity.

Local armed forces have formed in many parts of the South Asian country to resist the junta. There are repeated reports of serious human rights violations.