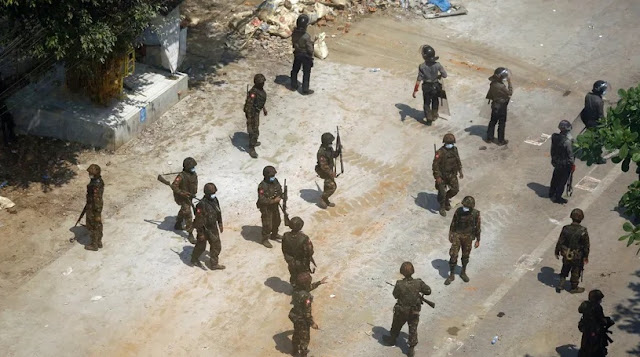 Eleven people are said to have been killed by soldiers in northwest Myanmar. The United Nations called the reports credible - among the dead were children.

In Myanmar , government troops are said to have raided a village in the north-west of the country and burned 11 people alive. United Nations spokesman Stéphane Dujarric expressed deep concern about the reports and condemned the violence. "Credible reports suggest that five children were among those killed," said the UN spokesman. Dujarric reminded the Myanmar military authorities of their obligations under international law to ensure the safety and protection of civilians and called for those responsible for "this heinous act" to be held accountable.

Eyewitnesses reported the attack. Film footage showed the cremated bodies of eleven people lying in a circle amid the remains of a hut in the village of Done Taw in the Sagaing region. According to reports, the soldiers attacked the village on Tuesday, rounded up the residents and handcuffed them. The images were shared on social media.

The AP news agency quoted an eyewitness who said that around 50 soldiers had marched into the village and arrested anyone who was unable to escape. The captured men are said not to have been members of the locally organized People's Defense Forces, which the army sometimes engages in fighting. The attack was apparently a retaliation for an attack on a military convoy.

The images could not be independently verified. According to the AP, however, the information provided by the eyewitness largely coincided with the descriptions of independent media. The Myanmar government denies that there were troops in the area.

Human Rights Watch called on the international community to put those responsible for the order to raid the village on a list of targeted sanctions. Any source of funding should be withdrawn from the military. "Our contacts say it was just boys and young people who were in the wrong place at the wrong time," said a spokeswoman. She added that similar incidents happened regularly, but that this was accidentally recorded by a camera.

In February, the military in Myanmar took over the government. In a coup, the de facto head of government Aung San Suu Kyi was arrested - as were other members of the government. A court recently sentenced Suu Kyi to prison. Specifically, it was about the allegations of incitement to riot and violation of Corona measures.