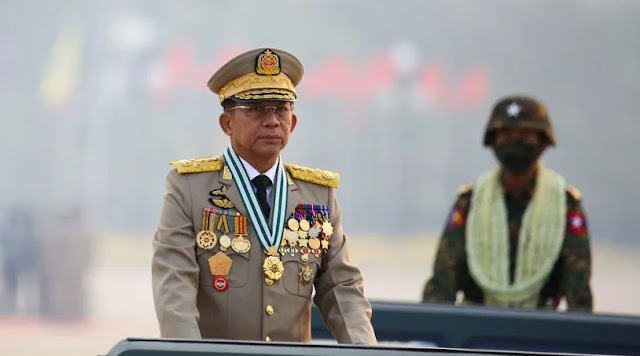 Travel bans and asset freezes are said to put pressure on the military junta in Myanmar. Opponents of the regime called for a strike in the country.

Great Britain, together with the USA and Canada, has launched new sanctions against the military leadership in Myanmar. The government imposed travel bans on leading representatives of the military regime and arranged for the assets of the persons concerned to be frozen, according to the British Foreign Office.

It is responding to the most serious human rights violations, including the persecution and killing of civilians for their religious beliefs, it said.

The former Burma has been falling into chaos and violence since a coup on February 1st. The generals had disempowered the de facto head of government Aung San Suu Kyi and charged with several alleged offenses. This week, the politician was sentenced to several years in prison. Any resistance to the regime is suppressed. There are hardly any mass demonstrations like in the weeks after the coup.

On Friday, opponents of the military government in Myanmar successfully called on people to close shops and stay at home on International Human Rights Day. The "silent strike" lasted from 10 a.m. to 4 p.m. In Yangon, the country's largest city, the normally busy streets remained empty, photos on social media showed. The otherwise overcrowded markets and squares were quiet hours before the official start of the strike.

Psychological war against the military dictatorship

Yangon student organization spokesman Min Han Htet said the strike in itself does not make much difference, "but by demonstrating their unity, the strike is a success for the people who are waging a psychological war against the military dictatorship.”. The authorities had announced since Thursday that they would take action against businesses if they shut down for no good reason.

According to estimates by the prisoners' aid organization AAPP, around 1,300 people have been killed since February. More than 10,000 were arrested.