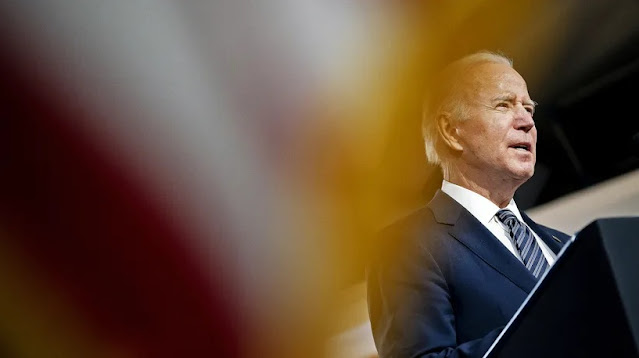 With his reform package Joe Biden wants to modernize the USA and overcome the division in society. But the sabotage also comes from within our own ranks. And now?

If the Democratic Party had started a poll a year ago asking them to imagine the greatest possible shadow that could fall over the first year of Joe Biden's presidency, the result would have been roughly what is happening. Build Back Better, as the government has called its billion dollar package of measures for infrastructure, social justice and climate protection based on Biden's central election promise, is about to end. And not only that: The wafer-thin majority of Democrats in the Senate has become worthless, the White House is practically incapable of action, the President is weak and vulnerable to blackmail. And all because of one man.

This man's name is Joe Manchin, a Senator for the state of West Virginia and a Democrat himself. And so it was doubly bitter for the Biden government when Manchin announced on Sunday - on Fox News of all places , the favorite broadcaster of the Trump-loyal Republicans - that he would not agree to Build Back Batter in the planned vote in January : "I can just not. " A decision of conscience, Manchin puts it in a press releasein more detail: The economic stimulus package will ultimately make the country look even weaker and plunge it into deep debt, plus rising inflation. In truth, the total cost of the reforms was $ 4.5 trillion, but the government would not make it transparent.

Build Back Better is the Biden government's largest and most ambitious project. It was the slogan of his election campaign, everything he stood for is in it: to reconcile the country after four years of Trump's presidency. Without losing sight of what made Trump's victory so easy: deep frustration over social injustice and poor health care, but also the feeling that America had nothing more to say in the world. The economic stimulus program is intended to fundamentally modernize the country, make it fairer and set the course for the coming decades, be it in the fight against the climate crisis or in the social security of the middle class.

In short: it is a legacy. Now it threatens to fail because of a single deviator from within its own ranks.

In the current version, Build Back Better is only half as large as originally planned. And again mainly because of one man: Joe Manchin. From the beginning he put a brake on Biden's reform policy. In order to somehow get it through, the government negotiated with him and deleted important points.

For example, she refrained from paying off student debts, which in the USA are often so high that they burden many people for a lifetime. And she decided to bring the reforms for infrastructure separately through Congress in advance - a step that left-wing democrats had warned against because they feared exactly the case that has now occurred: that Manchin's stance on the blockade will then affect them all the more Would focus on social reforms.

The fact that the Senator from West Virginia has this power at all is because Biden's party only narrowly won a majority in both chambers of congressional last year. The distribution of seats in the Senate is exactly 50:50 between Democrats and Republicans. The government only has a chance to get something through this chamber because Vice President Kamala Harris can vote as the 51st vote. But that only works if everyone else goes along with it - and Joe Manchin doesn't go along with it.

It is hardly surprising that the White House reacted with an unusually biting statement in which it accused Manchin of "breaching its obligations" to the President and colleagues in the Senate . He brought Biden off. The government apparently only found out shortly before Manchin's Fox interview of his decision that the Senator allegedly ignored a call from the White House on the way to the show.

If Manchin has his way, Biden's reform plans are not factual politics, but, as he repeatedly emphasizes, party politics. He wants Democrats to be more center-based, rather than "pretending that they have a 55 or 60 majority and can do whatever they want" . For him, who represents the impoverished mining state of West Virginia and who himself has earned millions of dollars from coal, that means that industry and jobs take precedence over climate protection when in doubt. This logic is perfectly understandable if one takes into account that West Virginia resolutely voted for the Democrats just a few years ago, but then voted more for Donald Trump than any other state.

He had promisedBringing back steel and coal jobs while then-presidential candidate Hillary Clinton renounced coal.

The point of contention on which Manchin's rejection now hangs has nothing to do with energy policy. It's about the so-called Child Tax Credit, which can be translated as child benefit. It was introduced as part of the Corona aid last summer and is now to be extended. For many families, especially in Manchin's home state of West Virginia, this amount of up to $ 300 per month per child is of existential importance. Surveys by the United States Census Bureau show that a large majority of the amounts are spent on food and clothing.

So what is Manchin doing? Is it really about content - or is he looking for an excuse to see Biden fail? Is he even a secret Republican, as has long been rumored?

Whatever his motives, they are a catastrophe for the Biden government, against which it is largely powerless. After less than a year in office, the president is publicly humiliated, his popularity ratings are already bad.

For the man elected to office with more votes than any other president before him, that's quite a descent. For the progressives in his party, who warned strongly that Manchin would do what he was doing now, it is further evidence that the moderate wing of the Democrats has too much power.

"There is so much at stake here"

The dispute within the Democratic Party pleased, that was predictable, the Republicans. They will take their chance to exploit this episode in the upcoming election campaigns. Because in the end one can definitely say: If Build Back Better fails, Biden fails. By placing this agenda at the center of his presidency himself, he has increased the height of the fall and linked his success to the success of his reforms. He doesn't have much time for that: in November part of the congress will be re-elected. Joe Manchin's seat is not up for re-election until 2024. But then it should no longer be Biden's biggest problem: If the Republicans win back the majority in one of the two chambers, and that could very well happen, they have the power that Manchin is currently using: to block the Democrats' plans.

But the stake is not just political. In the USA, too, what drives climate protection activists in this country applies: The time window in which it is still possible to initiate fundamental changes to mitigate the effects of global warming is closing at breakneck speed. Experts warn urgently of the consequences of further blockades, not only for the climate, but also for the economy.

In fact, Manchin's stance of refusal has already triggered a development that he supposedly wanted to prevent: The forecasts for economic growth in the USA are deteriorating. Goldman Sachs announced that only two percent should be expected for the first quarter of 2022 instead of the original three percent if the stimulus package fails. That's the equivalent of $ 60 billion.

How much is his word worth now?

To avert failure, the White House has little option but to continue negotiating with Manchin. When asked in a television interview how the government is going to get the package through now, Vice President Kamala Harris replied, "By not giving up." But their government has long since become subject to blackmail. Up until now, people had relied on Manchin to vote if they could only meet him far enough. Only: how much is his word worth?

Manchin writes in his statement that he had always wanted to find a solution that he could explain at home in West Virginia. So does he not want to let the package fail, but just increase the pressure to negotiate? For Biden, that would hardly make the situation any better: If Manchin dictates further conditions, in the end there is probably not much left of the vision that should have shaped this presidency. Left Democrats are already warning that they will not be satisfied with cutting the plan further. Why also? Finally, it is easy to argue that the appeasement policy towards Manchin has failed.

Biden might as well switch to confrontation and withdraw the promises he has made to Manchin so far. But that would mean missing another goal, since he has always presented himself as the one who wants to lead the democratic spectrum of US politics back to constructive cooperation. To govern, like its predecessor, primarily by decree, would be the opposite of the integrative claim of this presidency - but possibly the only way to realize at least some plans.