Israeli Prime Minister Travels To The Emirates For The First Time 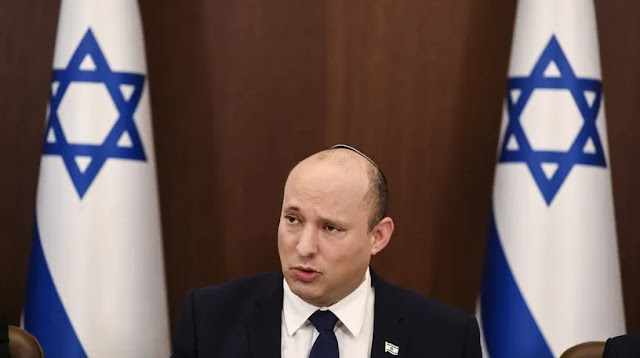 Naftali Bennett is Israel's first head of government to visit the United Arab Emirates. One reason is the faltering nuclear negotiations with Iran.

Israeli Prime Minister Naftali Bennett is officially visiting the United Arab Emirates for the first time. The visit comes as part of a regional diplomatic advance, as the nuclear negotiations with Iran in Vienna are progressing slowly. Bennett's office said the prime minister would meet with Crown Prince Mohammed bin Sajid and talk to him about strengthening economic and military ties.

This is the first visit by an Israeli Prime Minister to the United Arab Emirates. Israel and the Emirates have long cooperated in secret on security issues, but only formalized relations last year after the US brokered it. In addition to the Emirates, Bahrain, Sudan and Morocco had also begun to improve interstate relations under US mediation.

Bennett's trip coincides with the ongoing talks between the signatory states to the international nuclear agreement with Iran - with the exception of the United States, which unilaterally withdrew from the agreement under Donald Trump. The US recently imposed new sanctions on around a dozen organizations and individual leaders in Iran.

The sanctions are responding to "clear violations of human rights," said the Treasury Department in Washington. Among other things, you will meet Iranian Special Forces from the security services or counter-terrorism. The management of Iranian prisons is also affected by the sanctions.

Israel is not a negotiating party in the talks on the nuclear deal, but is watching developments with concern. In the past few weeks, Israel has sent its foreign minister, defense and intelligence chiefs to meetings in Europe, the US and the Middle East to advocate a more resolute deal with Iran.

Israel says it is determined to Iran on the nuclear Bewaffnung to stop. Tehran claims the nuclear program is only for peaceful purposes.