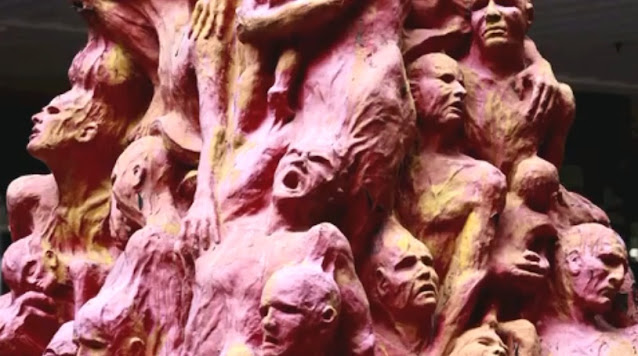 After the "Pillar of Shame" at the HKU, a wall relief and a statue were dismantled at other universities. A picture of the "goddess of democracy" was painted over.

In Hong Kong, monuments commemorating the Tiananmen protests in Beijing in 1989 have been removed from two other universities. This is followed by the two universities of the Hong Kong University (HKU), which on Thursday dismantled the eight-meter-high pillar of shame by the Danish artist Jens Galschiot.

Now the 6.4 meter high bronze statue of the goddess of democracy at the Chinese University of Hong Kong (CUHK) has also been dismantled. The university management announced that the statue had not been approved. After an internal evaluation, the decision was made to take this step.

"I'm heartbroken and shocked," said Felix Chow, a former CUHK student and a member of the district council. For him this statue represents "an open school environment", it is a "symbol of academic freedom". He told Reuters news agency: "People doubt whether the school can still guarantee that the room is free and that people can speak freely."

In the Hong Kong Lingnan University, on the other hand, a wall relief was removed. This also contained a representation of the goddess of democracy . Objects that represented "legal and safety risks" could have "been cleared or removed and stored accordingly," said a statement from the university to Reuters.

Next to it, a red picture of the goddess of democracy in the main hall of the student union of the university was painted over with gray paint. Both works of art were created by Chen Weiming. Reuters said the artist would sue the universities if his work is damaged.

The Danish artist Galschiot was also shocked when his pillar of shame was dismantled and transported away at the HKU. He also announced that he would sue the university.

His sculpture - "out of date" in the eyes of the university management - shows around 50 people with tortured faces. It has been on the HKU campus since 1997. According to Galschiot, he offered to take the statue back and, with the help of lawyers, tried to contact the university in various ways.

For decades, the Hong Kong Special Administrative Region was the only place in China where commemoration of the Tiananmen dead was tolerated. After months of mass protests in 2019 against the growing influence of Beijing, the authorities are proceeding with increasing severity against critics in the economic metropolis.

In July 2020, the so-called Security Act came into force: it allows the authorities to take draconian cracks against all activities that they believe threaten the national security of China.

Numerous leaders of the opposition have since been arrested or went into exile. The authorities said that commemorative ceremonies for the events in Tiananmen Square could be considered "subversive" and could be punished.