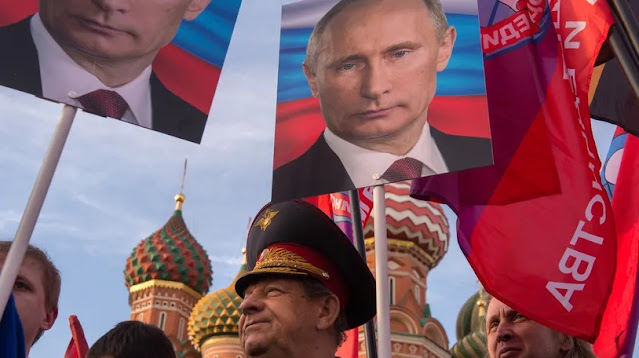 The Soviet Union has been history for 30 years. But thought patterns and political claims have remained - the Russia-Ukraine conflict shows this in the most glaring way.

Exactly 30 years ago the Soviet Union disintegrated. The dissolution of the USSR was carried out almost silently in the last days of December 1991. After the presidents of Russia and Ukraine, Boris Yeltsin and Leonid Kravchuk, and the Belarusian parliamentary chairman Stanislav Shushkevich agreed on the end of the USSR on December 8, Mikhail Gorbachev resigned as President of the Soviet Union on December 25, 1991.

Shortly afterwards, the Soviet flag was lowered over the Kremlin and replaced by that of the Russian Federation. Russia thus became the international legal successor to the Soviet Union and the Soviet Union was officially history.

It is less this historical moment at the end of 1991 than its dramatic prehistory that determines the memory of this time: The reform process of perestroika and glasnost initiated by Mikhail Gorbachev developed a momentum of its own that ultimately overwhelmed the reformer himself.

From the point of view of the present, the period that followed also has clearer contours than the moment of decay. The imperial legacy of the Soviet era continues to have an impact today - in economic and infrastructural interdependencies, but also in mentalities and political claims.

In retrospect, the end of the Soviet Union seems increasingly like a historical necessity. But this reading reduces the Soviet Union to a doomed experiment and fails to recognize its longevity and the contemporary perception of serious systemic competition in the Cold War.

Over the past 30 years it has gradually been forgotten how surprising the collapse of the Soviet Union was for contemporary witnesses in the Soviet Union and in the West. Within a short time frame the unimaginable for a long time became reality.

Attempts at explanations have weighted structural, international and personal and time-related factors differently. Medium- and long-term structural factors such as the stagnating resource-intensive planned economy, which increasingly contradicted modernization processes and social expectations, created the conditions for the collapse of the system, while an actor like Gorbachev and an event like the Chernobyl reactor disaster created the dynamics and timing of decay.

The dissolution of the Soviet Union meant the end of the Soviet-influenced socialist system and Soviet federalism, which was essentially an imperial order. Even before the official end of the Soviet Union, the Baltic states regained their independence; the Ukraine had already declared their independence and legitimacy through a referendum and the Central Asian Soviet republics received their national independence to have actively promotes without them. The different states and nation-building processes became a central element of the transformation processes beyond 1991 and continue to this day.

These wars have claimed tens of thousands of victims and displaced hundreds of thousands from their homes. The term "frozen conflicts", which is widespread in public discourse, is unable to depict the dynamics of these unresolved conflicts.

The annexation of Crimea by Russia in 2014, the war in eastern Ukraine since 2014 and the repeated deployment of Russian troops near the Ukrainian border are also closely linked to the legacies of the Soviet Union. In Russia, after the annexation of Crimea, President Vladimir Putin's popularity rose to over 80 percent. The war in Donbass has so far cost the lives of around 14,000 people; at least 1.5 million people from the Donbass have become internally displaced persons and about a million more have fled to Russia.

The Russia-Ukraine conflict is the most glaring example of how, in addition to economic and infrastructural entanglements in the form of gas and oil pipelines, above all the thought patterns and political claims of the former imperial center have been preserved.

The non-recognition of the Ukrainian state independence, which is expressed in the rhetoric of the "brother Slav people", has long been a part of the politics of Russian President Putin. In 2021 he made this topic a top priority with historical essays, military maneuvers and the demand for an explicit stop of NATO's eastward expansion. The Soviet Union could not be kept with the independence of Ukraine;

Even if Putin describes the collapse of the Soviet Union as a "geopolitical catastrophe" and, according to surveys, the Russian population once again sees Stalin as the most important historical figure who deserves respect, this memory of the Soviet Union is deliberately selective. It is less about the specific goal of reviving the Soviet Union - memories of the economy in scarcity and the victims of the system are still too present for that - than about a vague feeling of community and international greatness.

The annexation of Crimea did not remain a project of the political elite in Russia, a broad social Crimean consensus ( Krim nasch - The Crimea is ours) was linked to a series of positive emotions that at least temporarily filled the identity vacuum that had existed since 1991 in the center of the former empire.

The perception of the "East" remains undifferentiated

Occasionally, slip of the tongue of this kind creeps into reporting or even political rhetoric. In early December, for example, US Secretary of Defense Lloyd Austin mistook Russia for the Soviet Union when he warned of an attack on Ukraine. Even with the memory of the Second World War, an effort remains to question the equation of Russia and the Soviet Union and, for example, to look at Ukraine or Belarus.

One of the powerful legacies of the Soviet Union is a generalized perspective on the former Eastern Bloc. Although the East Central European countries have long since become an integral part of the EU and NATO, the perceived distance from Berlin to Warsaw is still much greater than that from Warsaw to Berlin.

And Kiev or Minsk only appear on the European map when there is mass mobilization for democracy. Sometimes the status of a host country at a book fair can also expand the horizon selectively.

Overall, however, the view to the "East" not only remains undifferentiated, it also has a predominantly negative connotation: Conflicts and corruption determine a large part of reporting and social perception.

These issues deserve attention, but they only capture a glimpse of life in an extremely diverse region that deserves more interest and curiosity three decades after the end of the Soviet Union. Only in this way can we detach ourselves from our mental Soviet legacies and at the same time sharpen our view of Russia's post-imperial claims.