CORONAVIRUS: Europe, At The Mercy Of The Omicron "Storm": "We Have To Survive The winter" 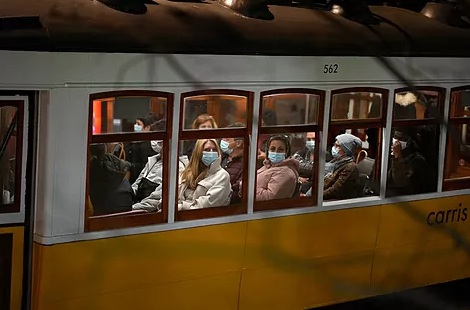 The WHO warns of the threat of the new variant that looms over Europe and that will put health systems "on the brink".

The song says that, at Christmas, "joy must be celebrated." However, in Europe, this will be a strange Christmas again, with small meetings, empty streets and closed shops, and with everyone waiting to see if two lines appear in the test that confirm what seems almost inevitable: positive for coronavirus . Ómicron is becoming the dominant variant in countries such as Denmark, Portugal or the United Kingdom. "Another storm is coming; these are unprecedented transmission rates.

In a matter of weeks, omicron will dominate and push health systems even further to the brink. The key question is how to survive the winter, how to leave no one behind," Dr. Hans Kluge sentenced yesterday, Director of the World Health Organization (WHO) for Europe.

With the continent turned "once again into the epicenter of the epidemic", in the words of the WHO, all European countries have announced new restrictions.

The country had already planned to adopt several restrictions - such as closing nightlife and imposing teleworking - during the first week of January (known as "containment week" ), but last Tuesday it decided to advance these and other measures from the early hours of the 25th. from December. Thus, a negative test will be requested to enter restaurants, casinos and party places the most important days (Christmas Eve, Christmas, New Years Eve and New Years). This test will be required even for those vaccinated and must also be presented at large events, hospitals or nursing homes. On those four calendar days, gatherings of more than 10 people will be prohibited and alcohol may not be drunk on public roads. A negative test will also be requested to stay in hotels or any tourist accommodation, go to a wedding, a cultural show or a sports event (regardless of capacity).

"Still, this is not a normal Christmas," had to admit Prime Minister Antonio Costa. His Government, which until now offered four free tests a month to each citizen, has promised to make six. All these measures will be in force until January 9, although on January 5 they will be reviewed in case it is necessary to extend them even more.

No measures have been taken in the face of Christmas, despite the fact that the number of daily cases could rise to 100,000 in just a few days, according to the Minister of Health admitted yesterday (on Tuesday the country registered 73,000 positives). The Minister of Labor, Elisabeth Borne , has called for companies to "accelerate" the use of teleworking, so that it is imposed between three and four days a week. In addition, the Executive will present a bill on Monday to transform the Covid certificate, which is required in restaurants, cinemas or shows, into a vaccination certificate.

With the intention of shedding some light on a gloomy outlook, Italian Prime Minister Mario Draghi insisted yesterday that two thirds of those who died or those admitted to the ICU by Covid are not vaccinated. "We invite all citizens to continue being vaccinated and receive the third dose, that is the priority," reiterated Draghi, who ruled out that mandatory immunization was on the table (health workers, teachers and law enforcement already are).

Today is the meeting of experts who will study adopting more measures to curb infections; Among them, it could be to force the use of masks outdoors, the requirement of tests for some activities in which it was not requested or the reduction of the validity time of the health certificate (currently in nine months).

The authorities limited to 10 people last Tuesday - two, if they are not vaccinated - the meetings and parties from December 28. "This is not the time to celebrate friendly parties and evenings with a lot of people," asked Chancellor Olaf Scholz, after meeting with the leaders of the 16 'Länder'. Nightclubs will close across the country - in some regions hardest hit by the pandemic, such as Bavaria, they already were. In addition, all sports competitions will be behind closed doors. For now, non-essential shops, cinemas and restaurants will remain open.

In the German country, which has been experiencing a worrying outbreak of the virus since the beginning of autumn, the unvaccinated population is still almost 30%. "The best way to defeat the omicron is to close the vaccination gaps through mandatory vaccinations," said Karl Lauterbac, the new German Health Minister (as well as a renowned epidemiologist).

This year there will be no Christmas markets, or reunions in restaurants. The deserted streets will be the stamp of Christmas in the Netherlands, where it is forbidden for more than two people to meet outside. Since last Sunday, the country has been in lockdown to try to stop the rapid advance of omicron. All non-essential shops, restaurants, bars, hairdressers, cinemas, museums and theaters will be closed until January 14.

Schools will open on January 10. These parties, in addition, the Dutch will have to face the dilemma of who they invite to dinner,because on December 24, 25, 26 (San Esteban) and 31 December, the meetings will be limited to four people (the rest of the days, at most, two). The measures have not been very well received by the population - for days there has been less hospital occupancy. Last November there were riots in The Hague and Rotterdam, following demonstrations rejecting previous restrictions. Rutte, widely criticized for the delays in the booster vaccination campaign, has acknowledged having "made mistakes" during the two years of the pandemic, but not having "lost control" of the situation.

To know if the confinements are useful or not, just look at Austria, which was there for 20 days, between November 22 and December 12. The incidence is decreasing (188 cases per 100,000 inhabitants) and although the country is no longer closed, the unvaccinated - 30% of the population - continue to have restricted access to restaurants or leisure and cultural venues.

The authorities announced new containment measures yesterday. Bars and restaurants will close at 10 p.m. from December 27 -also on New Year's Eve- and the maximum capacity for events (cultural, social or sporting) is 2,000 people, as long as they are vaccinated three times and show negative PCR. In events with lower volumes, two doses of the vaccine and a negative PCR are required.Meetings of more than 25 people are prohibited and travelers arriving from the United Kingdom, the Netherlands, Denmark and Norway, the most affected by omicron, will be asked to quarantine for 10 days: only those who have the three doses are released of the vaccine.

Belgian Prime Minister Alexander De Croo and the presidents of the country's regions met yesterday to re-evaluate the restrictions. Cinemas, theaters and concert halls will be closed and sporting events will be held without an audience. In addition, the authorities are preparing a pilot project to vaccinate at work, an initiative in which nine companies will participate.

Denmark, which in September assured that it had defeated the pandemic and returned to normality (eliminated Covid masks, capacity and passports), announced last Friday the closure of cinemas, museums or theaters.

The country, the second that has detected the most cases of the omicron variant, only behind the United Kingdom, registered 13,558 new cases on Tuesday, an unprecedented record. In Norway, the sale of alcohol in bars and restaurants has been banned for a week and teleworking and distance education are recommended in higher education. In addition, the military has begun to be recruited to give the booster doses. In Finland, bars and restaurants must stop serving alcohol at 9:00 p.m. and will have to close one hour later.

As of December 28 and for three weeks,The capacity of cocktail bars and discos will be reduced and they will have to close at 18:00. In Sweden, nightlife, especially discos and clubs, will be closed (also for New Year's Eve) and meetings with more than 20 people are only allowed if they are seated.