"Partygate" Boris Johnson: Controversy Over Photo Of Johnson And Others Drinking Wine In 2020 Lockdown 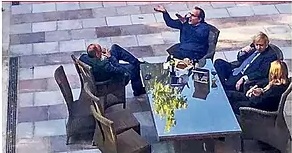 Dominic Raab defends the premier after the publication of the snapshots: "People were exhausted and they were just having a drink"

Attorney General Dominic Raab has defended Boris Johnson following the release of photos from the "party" on May 15, 2020 in Downing Street Gardens, attended by 17 people (including the "premier" and his wife Carrie) when Covid restrictions limited encounters to two people from different outdoor homes.

"The photo shows a group of people having a few drinks after a hectic day of business meetings," Raab said. "In other workplaces they would have done the same and that would not mean breaking the rules."

The attorney general's version differs in any case from that of Downing Street, which claimed that it was a business meeting in the open air (despite the presence of cheese and wine).

The publication of the photo in The Guardian has rekindled the fire of "Partygate", the scandal of the Covid parties in the mansion of the "premier" and in other government agencies while millions of Britons were under severe restrictions or in full confinement.

The meeting of May 15, 2020 took place precisely two weeks after Johnson's own reincorporation after being admitted to the ICU of St. Thomas Hospital with Covid and after a month's convalescence in which Dominic Raab (then secretary of Foreign Affairs) temporarily assumed his functions.

"I know how hard it was to work in Downing Street at that time during the response to the crisis," Raab has now declared, in his capacity as Chief Justice. "I think people were exhausted and were just having a drink, as is done in other workplaces (...) It is very clear and no rules were violated."

The first information about the Covid festivities at Christmas 2020 forced the resignation of former Communication advisor Allegra Stratton, after mocking the restrictions in a video. Boris Johnson announced the opening of an internal investigation led by Cabinet Secretary Simon Case, who has had to resign his role when it was revealed that he himself held two parties on those dates. A senior official, Sue Gray, relieved him of his role last weekend and is investigating at least three parties that may have violated the rules, including a "quiz party" in which Johnson himself virtually intervened and which they were able to attend more of 20 people.

The publication of the photos has added extra pressure to the "premier", just on the day when he must decide whether to impose new restrictions and apply the so-called "Plan C" of the Covid, which is opposed by a hundred "Tory" deputies and at least ten ministers from his own cabinet, according to The Daily Mail.

The spread of the Omicron variant has skyrocketed daily cases above 80,000. Meanwhile, more than 50% of the population has received the third booster dose, with the aim of reaching one million vaccinated daily this week.