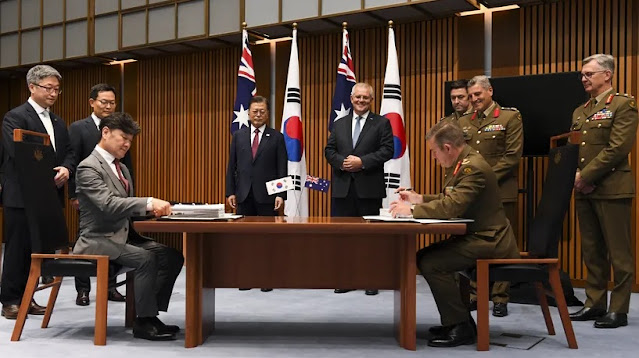 It is the largest arms agreement between Australia and an Asian country: South Korea is supposed to supply Australia with artillery weapons and radar equipment.

Australia and South Korea have agreed an arms deal worth one billion Australian dollars (around 635 million euros). The deal wassealedduring a visit by South Korean President Moon Jae In to Australia, the first visit by a foreign head of state to Australia since the pandemic began.

The agreement provides for the South Korean defense company Hanwha to provide Australia with artillery weapons, supply vehicles and radars.

It is the largest arms agreement between Australia and an Asian country. It comes at a time of heightened tension between Australia and China. Australia recently announced a security alliance with the United States and Great Britain under which the country will be supplying nuclear powered submarines using American and British technology. In favor of the deal, Australia canceled a contract that provided for the purchase of submarines with diesel-electric propulsion from French production.

Moon met with Australian Prime Minister Scott Morrison during his visit. Both agreed to upgrade the relationship towards a "comprehensive strategic partnership". Morrison and Moon also said there will be cooperation in developing clean energy technologies and facilitating the supply of certain critical minerals that Australia has in abundance.
Israeli Prime Minister Travels To The Emirates For The First Time
Morrison said the new arms deal will create around 300 jobs in Australia where Hanwha already operates. "The contract we signed today speaks volumes to me about the capabilities of the Korean defense industry," said Morrison.Moon said South Korea has values ​​similar to Australia in terms of geopolitical outlook. But the relationship with China is also important, especially with regard to the goal of peace with North Korea. "That is why South Korea is focused on the steadfast alliance with the USA and also with China."
France And Greece Sign Arms Deal
Australian Defense Minister Peter Dutton said his administration was committed to keeping the region safe and that the new agreement would help modernize the Australian army. South Korea is Australia's fourth largest trading partner and the fourth largest export market under a free trade agreement that has been in force since 2014. This year marks the 60th anniversary of diplomatic relations between the two countries.