Africa: The Gambia After 27 Years Of Dictatorship, Counting Votes for Presidential Election Is Ongoing 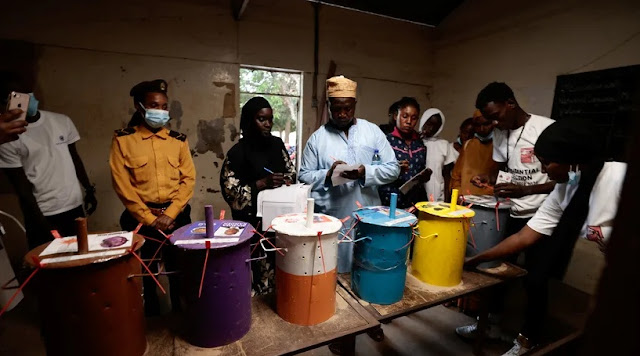 A large crowd of voters in the Gambia mobilized on Saturday to elect their next president in an election considered a test of democratic transition as it was the first in 27 years that dictator Yahya Jammeh did not run as a candidate.

Hundreds of people stood in long queues in which patients waited for their turn to vote at the more than 1,500 polling stations set up in the small West African country from 08:00 LT to 17:00 LT.

More than 960,000 Gambians are called to the polls to vote through a particular system with marbles (each crystal ball is equivalent to one vote) and in a round to the president for the next five years.

They will have to choose between six candidates of which three stand out: the current president Adama Barrow (56 years old), of the National People's Party (NPP); the historic opponent Ousainou Darboe (73 years old), from the United Democratic Party (UDP); and the candidate being backed by Jammeh, Mama Kandeh (56), from the Gambia Democratic Congress (GDC).

Barrow aspires to a second term that is not without controversy because, after winning the elections in December 2016, he promised that he would leave office in three years, a promise that not only failed to fulfill but has not prevented him from running for reelection.

Barrow won with 45.5% of the vote against Yahya Jammeh, who won 36.7% after ruling the country with an iron fist for 22 years.

For his part, in 2016 Kandeh was third with 17.07% and Darboe could not appear because he was in jail after participating in a protest and Barrow was the UDP candidate (to which he belonged at the time), supported by a coalition of eight parties.

The unexpected result of those elections in The Gambia caused a crisis that ended after Jammeh's acceptance of leaving power in January 2017 and with his exile in Equatorial Guinea, leaving behind a regime with serious human rights abuses, such as enforced disappearances, torture and extrajudicial executions, whose victims are still demanding justice

Adama Barrow: "We will never lose this election"

According to the electoral commission, the election went off without any major problems. Election Commission chairman Alieu Mommar Njie said the result will be announced by early next week at the latest. The challengers to Barrow were opposition leader Ousainou Darboe of the United Democratic Party, Mama Kandeh of the Gambian Democratic Congress, Halifa Sallah of the People's Democratic Organization for Independence and Socialism, Abdoulie Ebrima Jammeh of the National Unity Party and the independent candidate and former chief lawyer of the Truth Commission, Essa Mbye Faal.

We will never lose this election

Opposition leader Darboe came with his wives and other companions to a polling station in Bakau near the capital.

We are all winners if there is a peaceful election

The 22 years of Jammeh's reign were marked by arbitrary arrests, civil executions and other human rights violations, the Commission on Truth, Reconciliation and Reparation found.

She gave Barrow her 17-volume report last week. Barrow assured the victims' families that justice was being done. But he asked for your patience so that the legal process could take its course..