USA-China Summit: Biden Warns Of A Confrontation Between World Powers 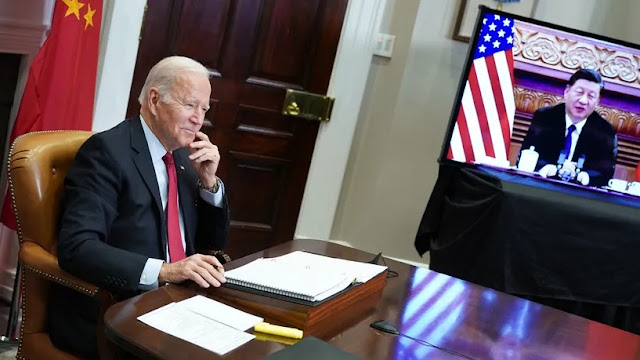 So far, US President Joe Biden and China’s President Xi Jinping have only talked on the phone. Now they have met for the first time by video - and admonished each other.

US President Joe Biden and China’s President Xi Jinping started their eagerly awaited video summit with mutual reminders. Biden warned of a confrontation between the world's two largest economies. It is their mutual responsibility "to ensure that competition between our countries does not degenerate into conflict, whether intentional or unintentional," he said. It takes "common sense guidelines," Biden said.

Xi called on the US president, whom he referred to as "my old friend", to work together more closely. China and the US should respect each other, peacefully coexist and cooperate, as the state media quoted him. Both countries should also live up to their international responsibilities.

It is the first personal, albeit virtual, encounter between the two presidents since Biden took office in January. Before that, both of them had only phoned twice. The talk, which is scheduled to last several hours, is also about reducing tensions between the two great powers. Press representatives were only allowed at the beginning of the exchange.

"Maybe I should start a little more formal"

Biden promised an open conversation. "Maybe I should start a little more formal, although you and I have never been so formal with each other," said Biden at the beginning of the video conference. Previously, President Spokeswoman Jen Psaki had said that Biden was going into the conversation "from a position of strength". It is about "establishing the rules of competition with China". China has to adhere to the international rules.

The relationship between the world's two largest economies is currently more strained than ever since diplomatic relations were established in 1979. Both see themselves as competitors. Among other things, there are tensions over trade issues, because of the human rights situation in China and China's dealings with the Hong Kong Special Administrative Region and the island of Taiwan.

"It is important to keep communication channels open," said a US government official before the video conference between Biden and Xi. "The President will also make it clear that we want to set up common guard rails in order to avoid misjudgments." At the same time, the White House dampened expectations of the concrete results of the conversation. These are not to be expected.

The government in Beijing has meanwhile made it clear that it sees the US as responsible. "We hope the US will work in the same direction as China to get along," said Chinese Foreign Ministry spokesman Zhao Lijian.

It is also about the Taiwan conflict

Chinese state media named Taiwan as a central issue. The US would have to "take a step backwards" on the Taiwan issue, wrote the Global Times. The government in Beijing regards the island as a breakaway province which, if necessary, should be reunited with the mainland by military force. The United States recently protested behind the government in Taipei and, shortly before the video summit, issued another warning to Beijing about the growing pressure on Taiwan.

Biden sees the economically and militarily up-and-coming China as the greatest geopolitical challenge of the 21st century and intends to resolutely oppose the government in Beijing. At the same time, he seeks cooperation on issues such as climate protection.

Since taking office, Biden has spoken to Xi twice on the phone. The two heads of state have not yet met personally because Xi has refrained from traveling abroad since the beginning of the corona pandemic. Xi had not traveled to the G20 summit in Rome, nor to the subsequent world climate summit in Glasgow. Biden had criticized that.