US Defends Airstrikes That Kill 'Civilians' In Syria The U.S. military says an airstrike in Syria in 2019 killed dozens of people.

Authorities have not been able to determine the identities of the more than 60 people, but a spokesman told the BBC it was "very possible" that more civilians had been killed in the attack.

According to the New York Times, the attacks were never independently investigated and the newspaper's report accused the US military of covering up the incident.

The US airstrikes took place on March 18, 2019, in the eastern Syrian town of Waqe Baghdaz, the last stronghold of the Islamic State.

According to the New York Times, the American plane dropped three bombs, although according to the footage obtained from the drone, a large number of civilians were present at the place where the bombs were being dropped.

Military officials ignored the concerns immediately after the attacks, and later, when the incident was investigated by the Department of Defense, the mention of air strikes was "deleted."

According to the New York Times, the attack has never been independently investigated.

Janet Tate, a US official working on the incident, told the newspaper that not only had she been forcibly removed from her job, but that she had been told that "the authorities wanted it to be just that. It should be buried somehow and no one should have anything to do with it.

The US Central Command has denied the allegations. In a statement to the BBC, spokesman Capt. Bill Urban said US forces had been assured that no civilians were present at the scene of the attack.

The statement added that it was only after the attack that the United States learned of a drone video from an ally that suggested civilians were present.

The United States has said in a statement that the bomber struck shortly after noon in front of a U.S. military base, killing at least 16 people and wounding dozens more. 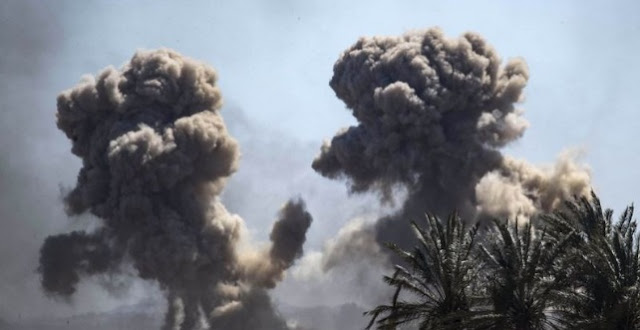 According to the spokesman, "the reason for this uncertainty is that the video shows several women and at least one child carrying a weapon and therefore the final decision cannot be made." Who has a weapon and who doesn't. The majority of those killed were probably militants, but it is possible that more civilians were killed in the two attacks.

According to spokesman Capt. Bill Urban, the U.S. military says in a statement that "both attacks were justified and justified. They were carried out in self-defense and did not require any disciplinary action."

The spokesman did not comment on the allegations made by the New York Times.

It should be noted that the capture of Baghdad was a very important stage in the war to defeat the Islamic State.

What is Islamic State?

The Islamic State is an extremist Islamic group that emerged internationally in 2014 after occupying large parts of Iraq and Syria.

The Islamic State, meanwhile, imposed its harsh system on 8 million people and perpetrated countless atrocities, destroyed cultural heritage and made billions of dollars for itself through extortion, theft, kidnapping and oil.

After five years of bloodshed, local forces, with the help of international forces, liberated all areas from Islamic State.

However, the Islamic State claimed last year that it had carried out more than 600 attacks in Syria and more than 1,400 in Iraq.