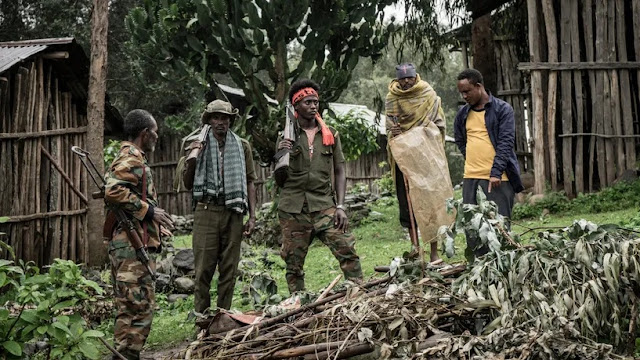 Violence escalates in the conflict between the Ethiopian government and the rebel group TPLF. The UN body is now calling for an end to the fighting.

The UN Security Council has called for an end to the violence in the crisis country Ethiopia. The UN body demanded that the conflicting parties "negotiate a permanent ceasefire and create the conditions for the start of an inclusive Ethiopian national dialogue".

The 15 members of the Security Council expressed deep concern about the escalating violence and the humanitarian situation in the country. "Hate speech and incitement to violence and division" must be avoided.

The conflict between the Ethiopian government and the rebel group TPLF from the northern Ethiopian region of Tigray, which had been going on for a year, had intensified significantly in the past few days. The government announced a state of emergency on Tuesday.

The military conflict began when Prime Minister Abiy Ahmed began ousting the TPLF, which was in power in the Tigray region. She dominated Ethiopia for a good 25 years until Abiy came to power in 2018. Many people in Tigray feel that they are not represented by the central government and are demanding more autonomy. Many of the top commanders in the Ethiopian army came from Tigray. Many of them switched sides after the conflict broke out and are now TPLF commanders. The well-trained fighters of the rebel group have practically been on the rise since July.

The TPLF is advancing - most recently with rebels from the Oromo Liberation Army (OLA) - from the north. They also took control of a strategically important stretch of highway in the country. According to reports, the militias are trying to cut the supply route from the port in neighboring Djibouti to Addis Ababa. The rebels are less than 400 kilometers from the capital.

The humanitarian situation in the country remains disastrous: around 400,000 people in the north are now at acute risk of starvation. The United Nations claims that it can deliver only a fraction of the humanitarian aid it needs to those in need. Unlike the USA, the UN has not yet brought certain employees in the region to safety. However, the situation is being reassessed from day to day, said UN spokesman Farhan Haq.

The imposed state of emergency also worries human rights organizations. Amnesty International says authorities can now revoke licenses from media and non-governmental organizations that are accused of "supporting terrorism". Criticism of the new regulation is prohibited according to the decree. The UN refugee aid warned of a further deterioration in the situation at the expense of the civilian population. Managing Director Peter Ruhenstroth-Bauer said: "A further escalation of the conflict away from the global public will exacerbate the humanitarian emergency in the country."