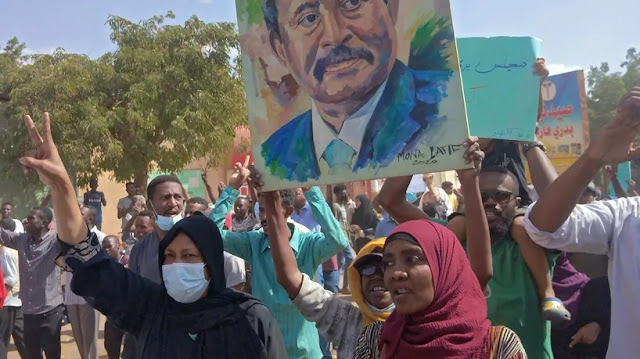 Before the announcement, the UN Secretary General and the US Secretary of State had telephoned the General. António Guterres also called for Abdalla Hamdok to be released.

Sudan's military leadership has ordered the release of four ministers arrested during the coup a week and a half ago. The "supreme commander of the armed forces", General Abdel Fattah al-Burhan had the release of the ministers for telecommunications, trade, information as well as youth and sport, reported the state television.

Shortly before the announcement of the order, UN Secretary General António Guterres made a personal phone call to Burhan to make it possible for Sudan to return to democratic transition. According to a UN statement, Guterres called on the general to "make every effort" to resolve the political crisis in Sudan and to restore constitutional order and the transition process."

Guterres demanded again the release of the civilian government members, including the Prime Minister Abdalla Hamdok, who is under house arrest. The Sudanese army had previously announced that a new government would be presented shortly.

Antony Blinken calls for a dialog

On the same day, US Secretary of State Antony Blinken asked Burhan in a telephone call to take measures to ease the situation. In the conversation on Thursday, Blinken also demanded the release of all politicians who were arrested during the coup, said the US State Department in Washington. Blinken called for a dialogue to restore the country's civilian government. He also expressed his hope that the military would take the necessary steps to enable US-Sudan cooperation to continue.

According to the ministry, Blinken also phoned the country's disempowered head of government. The Foreign Minister had told Hamdok that the United States supported the Sudanese people's striving for democracy.

On October 25, soldiers arrested the civilian members of the interim government in Sudan. Burhan declared a state of emergency and announced the formation of a new government with "competent people". The coup had been condemned internationally. Most recently, Saudi Arabia and the United Arab Emirates also called for the restoration of the civil government. In the past few days, thousands of Sudanese protested against the military coup . The security forces cracked down on the demonstrators. Several people died.

After the overthrow of long-time ruler Omar al-Bashir in 2019, a so-called Sovereign Council took over government in Sudan, in which the military and civilians shared power. The transition phase should end in 2023 with the establishment of a civilian government. The country suffers from high inflation, economic problems and deep political divisions.