Storm On US Capitol: "QAnon Shaman" Sentenced To Three And A Half Years In Prison 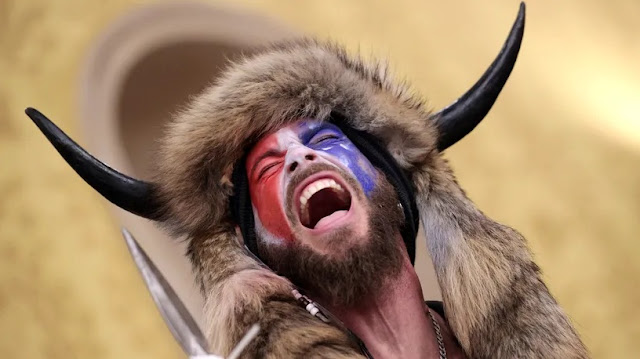 Conspiracy theorist Jacob Chansley became one of the most recognizable faces of the forcible storming of the US Capitol on January 6th. Now he has to go to jail.

Jacob Chansley, who became known as the "QAnon Shaman" during the attack on the US Capitol in January, has been sentenced to just under three and a half years in prison. A federal judge in the US capital Washington sentenced the 34-year-old to a 41-month prison term. That equates to three years and five months in prison.

The man from Phoenix, Arizona, stormed the Capitol on January 6th along with other supporters of the elected President Donald Trump. Pictures of Chansley with a bare torso full of tattoos, a painted face, a fur hat with buffalo horns and a spear with a US flag went around the world. The self-proclaimed "shaman" and supporter of the QAnon conspiracy theory thus became one of the most famous Capitol attackers and a face of the violence of January 6th.

Read also: Storm On US Capitol

The Justice Department had demanded 51 months imprisonment for Chansley's prominent role in the storming of the Capitol. In theory, he would have been threatened with up to 20 years in prison.

According to the US judiciary, he was one of the first 30 attackers to storm the interior of the parliament building and penetrated into the plenary chamber of the Senate. The 34-year-old was arrested a few days after the storm on the Capitol and has been in custody ever since.

Radical Trump supporters had used force to gain access to the Congress building when the victory of Democrat Joe Biden in the presidential election on November 3, 2020 was to be formally confirmed. Five people were killed, including a police officer and an attacker who was shot by the police. In the course of the far-reaching investigation into the storming of the Capitol, more than 570 people were arrested and over 650 charges were brought, according to the Justice Department.