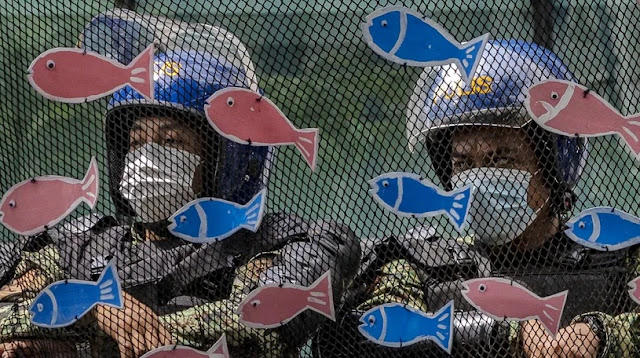 The Chinese Navy fired water cannons on Philippine supply ships in the South China Sea. The Philippines speak of an illegal action.

The situation in the South China Sea has been tense for a long time, and now there has been another incident. This time the Chinese and Filipino navies were involved. The government in Manila accused the Chinese coast guard of blocking two Philippine supply ships and shooting them with water cannons.

The ships were on their way to troops near the Second Thomas Shoal claimed by the Philippines and guarded by Marines aboard a stranded warship. Although no one was injured, the supply ships had to stop the operation, said the Philippine Foreign Minister Teodoro Locsin. "The actions of the ships of the Chinese Coast Guard are illegal," said Locsin and called on the Chinese Coast Guard to withdraw from the area, which is located in the internationally recognized exclusive economic zone of the Philippines.

Read also: US vs China

Locsin pointed out that the supply ships were covered by the defense agreement with the United States . US President Joe Biden has reiterated that the US would meet its obligations under the agreement if the ally's armed forces were attacked.

The United States is patrolling warships and fighter jets in the South China Sea to secure freedom of navigation and aviation, it claims . China has repeatedly urged the US government not to interfere in regional disputes.

In the South China Sea there are territorial conflicts between China and other neighboring countries. There are always incidents. The government in Beijing claims 80 percent and thus practically the entire South China Sea.

Important shipping routes run through the roughly three million square kilometers of the ocean, which is rich in natural resources. In addition to the Philippines, Vietnam, Taiwan, Brunei and Malaysia also lay claims to parts of the area. The International Court of Arbitration in The Hague rejected China's claims in 2016. China ignores the verdict.