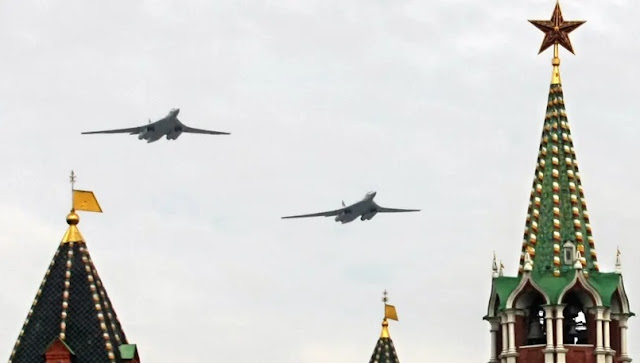 The situation at the EU's external border is tense: Russia is now sending fighter jets for a military exercise. "We have no other choice," says ruler Alexander Lukashenko.

Russia  has dispatched two nuclear weapons-grade warplanes on a training mission over Belarus. Observers see this as a signal of Russian support for its ally in the dispute over the tense situation on the Polish border.

The Ministry of Defense in Minsk announced that two strategic Tu-160 fighter planes had carried out a series of test flights on the Ruschanski military site, including bombing. As part of the joint exercise, Belarusian fighter jets simulated an interception maneuver.

It was the second time in two days that Russia had deployed nuclear-capable combat aircraft into the airspace over Belarus . Most recently, two Tu-22M3 long-range bombers were used in an exercise.

"We have no other choice"

Ruler Alexander Lukashenko described the fighter planes as a necessary response to the tensions on the Polish EU external border. "Let them scream and scream. Yes, these are nuclear weapons-grade combat bombers, but we have no choice."

The Belarusian Defense Ministry accused Poland of unprecedented military deployment on the border. Migration control does not justify the consolidation of 15,000 soldiers as well as tanks, air defenses and other equipment. The whole thing looks more like an attack group is being formed, the ministry said. Therefore Belarus must react to the situation "both independently and within the existing agreements with our strategic ally".

Thousands of people are currently waiting in the forest areas on the border to get to Poland and thus to the EU. The EU accuses Belarus of deliberately bringing people to Eastern Europe with tourist visas and then smuggling them to the West. Russia is firmly on the side of Lukashenko.

Chancellor Angela Merkel recently spoke to Russian President Vladimir Putin about the situation. According to her own statements, she also asked him to mediate. She described the instrumentalization of migrants as inhuman and completely unacceptable, said government spokesman Steffen Seibert.