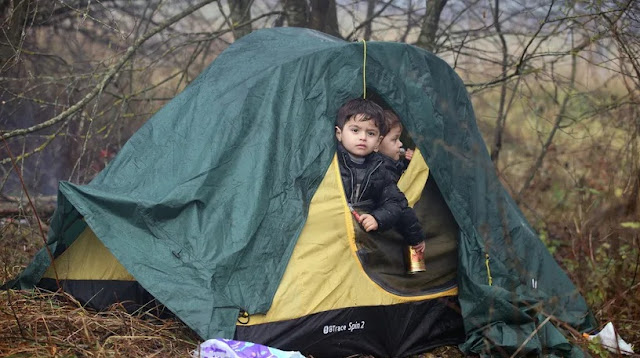 In the Polish-Belarusian border region, up to 4,000 people camp in icy temperatures. Lithuania wants to impose a state of emergency for its border area.

When the temperature was below zero, thousands of refugees spent the night in tents in the border region between Belarus and Poland. Belarusian state media released photos and videos of people gathered around campfires and children lying in sleeping bags on the ground in the forest area. The local Polish police authority announced on Twitter that it was quiet except for a stone's throw.

The government in Warsaw and the EU are accusing the authoritarian Belarusian President Alexander Lukashenko of having people flown in from crisis regions such as Afghanistan and Iraq in order to smuggle them into the EU. On Monday, according to the Polish authorities, larger groups of refugees on the Belarusian side near the now closed Kuźnica border crossing tried in vain to break through the fence. According to Polish authorities, there were between 3,000 and 4,000 migrants in the border area.

The Belarusian Interior Minister Ivan Kubrakov confirmed, according to the state agency Belta, that the number of migrants in Belarus has increased. "But you come to our country with a visa and check into hotels." Belarusian authorities are criticized for pushing people in the direction of the Polish border and then not letting them back into the interior.

The situation also hinders freight traffic. Truck drivers had to wait around 21 hours for clearance at the Bobrowniki border crossing, as the Polish border guards announced. One of the reasons for this is the closure of the Kuźnica border crossing in the Podlaskie Voivodeship. According to the Polish authorities, large groups of migrants tried in vain to break through the fence from the Belarusian side.

Lithuania wants to declare a state of emergency

Lithuania announced that it would impose a state of emergency in the border region for a month. The government of the Baltic EU country submitted a corresponding resolution to the parliament in Vilnius for approval. The cabinet is following a proposal by Interior Minister Kuźnica. President Gitanas Nausėda announced talks with representatives of the government, the border guards, the military and the secret service. The state of emergency should also be discussed.

According to the plans, the state of emergency will apply from midnight along the border with Belarus and five kilometers inland and in the migrant shelters in Kybartai, Medininkai, Pabradė, Rukla and Vilnius. "We are watching what is going on on the Polish-Belarusian border," said Bilotaitė. She justified her proposal to declare a state of emergency to respond to this by strengthening the security of the borders. The Lithuanian interior minister wanted to discuss the situation at the border with her German counterpart Horst Seehofer . In an interview, the Federal Minister of the Interior called for EU support for Poland.

Lithuania is currently building a high steel barrier on the border with Belarus. The EU country has already completed the first sections with a three to four meter high fence. Video surveillance devices and barbed wire are intended to additionally secure the sections.