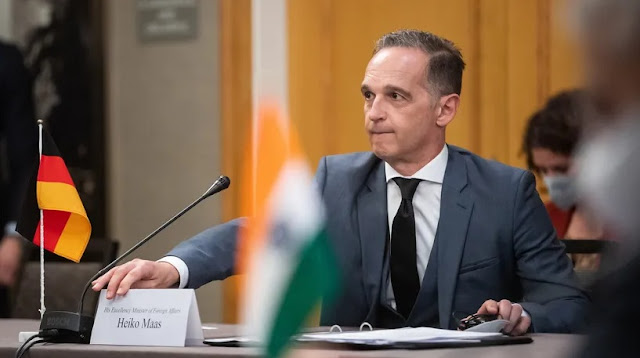 The foreign minister warns airlines and countries of origin against cooperating with Alexander Lukashenko in the refugee dispute. He announces "clear consequences".

The Acting Foreign Minister Heiko Maas is in favor of sanctions against anyone involved in the smuggling of refugees to Belarus. "Nobody should be allowed to take part in Lukashenko's inhumane activities with impunity," said the SPD politician, referring to the behavior of the ruler Alexander Lukashenko. This applies to countries of origin and transit, but also to airlines that enable people to be transported to Belarus. The European Union is ready to "draw clear conclusions here".

The EU accuses Lukashenko of deliberately bringing migrants into the country in order to then bring them to the border with Poland for onward travel to the EU . It is presumed that the rulers are seeking revenge for the sanctions that the EU has imposed because of the repression of civil society and the democratic opposition. On the EU's external border between Poland and Belarus, thousands of people are now hoping to come to the West under extremely adverse conditions.

According to a Polish media report, two large groups of migrants managed to break through the border on Wednesday night. Several dozen migrants had managed to destroy fences near the villages of Krynki and Bialowieza and to cross the border, reported the Polish news agency PAP, citing the local broadcaster Bialystok. The station quoted a spokeswoman for the border guard that in both cases fences and barriers had been forcibly torn down. Some of the migrants have been returned to Belarus, while others have been released.

"The pictures and impressions that we get from the Belarusian border area are appalling," said Maas in his written statement. "Mr. Lukashenko continues to turn a dangerous spiral of escalation from which there is no way out for himself. He unscrupulously uses people seeking refuge as hostages for his cynical power game." But the EU is not open to blackmail.

The SPD politician also spoke out in favor of further direct EU sanctions against Belarus. "Lukashenko has to recognize that his calculations are not working. Incidentally, that does not rule out extending the sanctions to other areas of the economy in the future." Some economic sectors such as the potash industry and energy industry are already subject to punitive measures.

Maas has only been acting minister since the end of October, but is involved in the coalition negotiations with the FDP and the Greens. He also promised humanitarian aid for refugees on the border. Various organizations are ready. According to diplomats, the permanent representatives of the governments of the EU countries want to launch an expansion of sanctions this Wednesday. They could be decided at a meeting of EU foreign ministers on Monday.