Refugee Crisis | Escalation Of Violence On The Polish-Belarusian Border 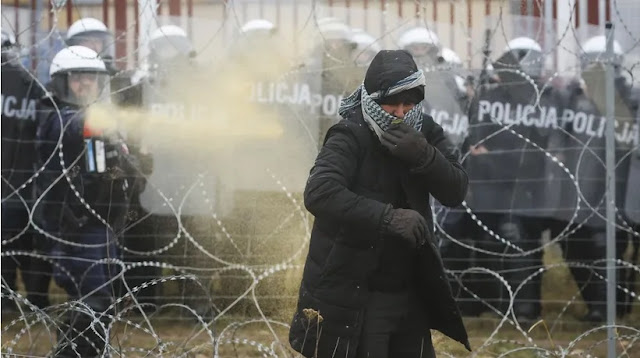 Violence between refugees and security forces has again broken out on the border between Belarus and Poland. There were several injured.

Several people were injured in violent clashes between Polish security forces and refugees on the Belarusian border. Polish security forces said they used tear gas and water cannons against refugees after stones were thrown at them from their ranks. Seven police officers, a border guard and a soldier were injured. According to Belarusian sources, several refugees also had to receive medical treatment.

The Polish Ministry of Defense said there had been "an attack by migrants" to which the security forces had responded. The situation escalated when refugees tried to destroy the border fence near the Bruzgi-Kuznica crossing.

According to the Belarusian Ministry of Health, around 20 of the migrants currently camping on the Polish border have received medical treatment in the past few days. Five of them were cared for on Tuesday because of problems with their eyes or breathing difficulties.

Russian Foreign Minister Sergei Lavrov condemned the actions of the Polish security forces as "absolutely unacceptable". According to him, they also fired "shots over the heads of migrants in the direction of Belarus".

The government in Minsk accused Warsaw of being responsible for the escalation of violence. "Direct provocations and inhuman treatment" of the "disadvantaged" people at the border had come from the Polish side, said Foreign Office spokesman Anatoli Glas.

The EU, on the other hand, accuses Belarusian ruler Alexander Lukashenko of deliberately smuggling refugees into the border area with the EU in order to take revenge for earlier sanction decisions by the European Union. Minsk rejects this allegation.

Chancellor Angela Merkel (CDU) called for a de-escalation on Monday in a phone call with Lukashenko. According to the German government, the conversation revolved around "the difficult situation on the border" with the EU. Above all, it was about "the need for humanitarian aid".

Merkel was the first Western head of government to have spoken to Lukashenko on the phone since the controversial re-election of Lukashenko in 2020. The Greens criticized the phone call as a "devastating signal". Your foreign politician Omid Nouripour pointed out on Deutschlandfunk that the EU did not recognize Lukashenko's re-election. With her phone call, however, Merkel de facto achieved exactly this recognition.

Lukashenko assured on Tuesday that he wanted to avoid a "heated confrontation" at the border. He agreed with Merkel that an escalation would not benefit anyone - "neither the EU nor Belarus," said Lukashenko, according to the state news agency Belta. According to the Kremlin, he also called Russian President Vladimir Putin on Tuesday about the situation at the EU border.

According to the Polish border guards, around 4,000 refugees are currently camping in icy temperatures on the Belarusian side of the border. On Tuesday, Minsk announced the establishment of a "logistic center" in the Grodno region where migrants could spend the night.

The Council of Europe Commissioner for Human Rights, Dunja Mijatovic, spoke of an "extremely dangerous situation" after visiting areas on the Polish side of the border. She called for unrestricted access for aid organizations and media workers to the border area. On the basis of a state of emergency, Warsaw is currently banning aid workers and journalists from entering the border area.

The EU is currently preparing new sanctions against Belarus. The EU foreign ministers set the course for this on Monday. The US State Department also announced new punitive measures against Minsk. At the same time, the EU recently put pressure on the refugees' countries of origin and transit to prevent flights to Minsk. In some cases this has already shown success.

Turkish Airlines blocked all flights to Minsk for people from Syria, Iraq and Yemen, and the Syrian airline Cham Wings suspended its connections to the Belarusian capital. The Iraqi embassy in Moscow announced on Tuesday that it would begin voluntary repatriation of Iraqis from Belarus. According to this, 200 people are to be flown back to Iraq on Thursday.