Military Coup In Sudan | "The People Are Stronger" 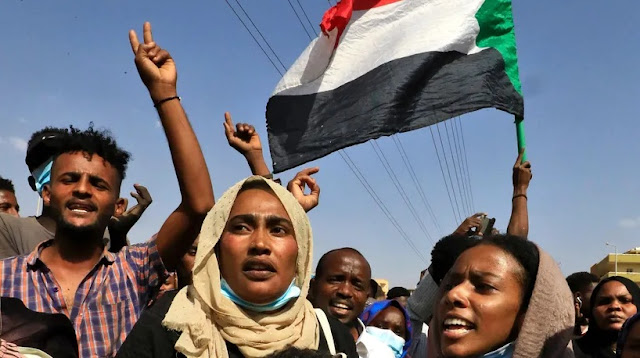 After the coup in Sudan, the military has a problem: the population is resisting the "Egyptian way".

Monday, October 25th, early morning in Khartoum. Nobody is surprised when the soldiers arrive. Least of all the prime minister, whom the generals have been threatening for days. Armed men kidnap Abdalla Hamdok and his wife Muna Abdalla to an undisclosed location. Military vehicles hit the streets, blocking bridges over the Nile. State television plays patriotic songs on a loop, ministers are arrested. In the afternoon, the commander-in-chief of the armed forces, Lieutenant General Abdel Fattah al-Burhan, appears in front of the cameras, declares the state of emergency and the interim government under Hamdok's leadership as dissolved. According to Burhan, the military had to act "to ensure the security of the country". It's a coup, even if Burhan doesn't want to call it that.

Sudan's army, it seems, on October 25th, embarked on the "Egyptian route" and laid the grave lid on democratization . Burhan and Egypt's president and ex-army chief Abdel Fattah al-Sissi are close friends. The last thing Al-Sissi wants in his "backyard" is a democratic Sudan. Both also enjoy the support of Saudi Arabia and the United Arab Emirates. Free elections, protection of civil rights and transparent governance do not appear in their worldview either.

General Burhan, however, has a problem: Sudan's protest movement is bigger, more closed and more organized than the Egyptian ever was.

The coup has barely started when students, teachers, doctors, lawyers, traders and taxi drivers are mobilizing. "Power and prosperity belong to the people, not to a military coup," the Sudanese Professionals Association (SPA), an umbrella organization of 17 trade unions, posted on Facebook. Neighborhood committees set up barricades. Arrested activists are immediately replaced by others. When the military cut the Internet and cell phone lines, the various resistance groups communicate with small handouts. Hundreds of thousands gather on the streets for a "March of the Millions" on Saturday after the military coup. Not just in Khartoum, also in Omdurman, Al-Obeid, Port Sudan and other cities. Hamdok and his wife are already back home and under house arrest. In the days before, the Prime Minister had refused to approve the takeover of power by the generals. Outside the people are chanting: "Hamdok, we will bring you back", "No to military rule" and: "The people are stronger".

Some soldiers and paramilitaries shoot with tear gas and live ammunition. At least three people are killed. But the bloodbath that many feared is not happening. Rumors are circulating that some officers are distancing themselves from Burhan. Are the people really stronger?

Sudan, of all places, which had been in the headlines for decades because of wars in Darfur and other regions, began what is perhaps the most astonishing chapter of the Afro-Arab democracy movements in 2018.

After months of peaceful mass protests, Omar al-Bashir took place in April 2019, one of Africa's longest-serving dictators, was overthrown by his own generals who had become too afraid of the population. When the military wanted to declare the revolution complete and take control of the country, the huge sit-ins and protest rallies continued. The protesters were not silenced by waves of arrests, torture or a massacre that left over a hundred dead in June 2019. A few weeks later, the generals and the broad alliance of democratic opposition groups agreed on a "sovereign council" made up of military and civilians and a transitional government headed by the economist Abdalla Hamdok. The common milestone: free elections in 2023. November of this year, Burhan should have handed over the chairmanship of the Sovereign Council to a civilian under the 2019 agreement. The civilian members would have been in the majority in the most powerful body to date. The general wouldn't let it get that far.

Bringing those responsible for the June 3, 2019 massacre to account was just as much part of the deal between the generals and the democracy movement as was the search for missing state funds and the fight against corruption. That quickly went too far for the military. As early as May, the main investigator of the June 2019 massacre, human rights lawyer Nabil Adeeb, told a journalist that he feared that the publication of his report "could lead to a coup". Adeeb's results would make official what everyone in Khartoum knows anyway. Several videos clearly show the perpetrators of the manhunt that night: uniformed soldiers and, above all, members of the Rapid Support Forces (RSF), a paramilitary unit that emerged from the Janshaweed. These are those militias who are held responsible for ethnic displacement, massacre and mass rape in the Darfur war. Its commander, General Mohammed Hamdan Daglo, known as "Hemeti", was once responsible for protecting Bashir, brought his master from the presidential palace to prison in 2019 and became the second most powerful man in uniform after Burhan. Some also say: the most powerful.

The Darfur paramilitaries and the regular army distrust each other. But the threat from the civilian camp has welded the two together for the time being. They fear that they will end up in court under an elected civilian government in Sudan. And they fear for their accounts. Sudan's gold mines are a rich source of income for the army, as well as for the RSF. Hemeti has built a business empire that ranges from gold exports and the placement of mercenaries in foreign war zones to construction companies. Like in EgyptArmy officers like to move to the executive chair of a military-controlled company after retirement. Mobile communications, grain, oil - the choice is huge. But recently there was increasing pressure on the army command to place their companies under civilian control. Also because the state that bled under Bashir urgently needs money.

The military themselves were apparently surprised by the "second revolution" after its coup. The fact that bread, sugar and oil suddenly became cheaper in the past few days - probably thanks to financial support from the United Arab Emirates - did not help them much. "Again the putschists have miscalculated," tweeted Kholood Khair of Insight Strategy Partners, a Sudanese think tank in Khartoum. "The street cannot be bought."

So is the peaceful street pressure really stronger than the generals' arsenal?

So far, they have apparently been wary of all too brutal violence. But they have other strategies, for example they can mobilize supporters of the Bashir regime, some of whom still exist, against the democracy movement and thus incite street fights. The non-violent nature of the protests would be gone and the army could act as a savior from civil war.

Whether Burhan and Hemeti rely on such a strategy depends largely on how painful the international pressure on them becomes. The African Union (AU) immediately suspended Sudan's membership after the coup, the US condemned the coup and froze economic aid amounting to $ 700 million. The decisive question is whether the USA, the AU and the EU can coordinate a joint approach - with targeted sanctions against the military and with enough pressure on Egypt and the United Arab Emirates. They don't want any democratic conditions in Sudan. But they don't want to have to absorb the country in the event of an economic collapse.

The protests will continue, civilians and the military may soon start their first attempts at talks. It is unclear whether a majority in the protest movement will even want to negotiate with Burhan and Hemeti again.