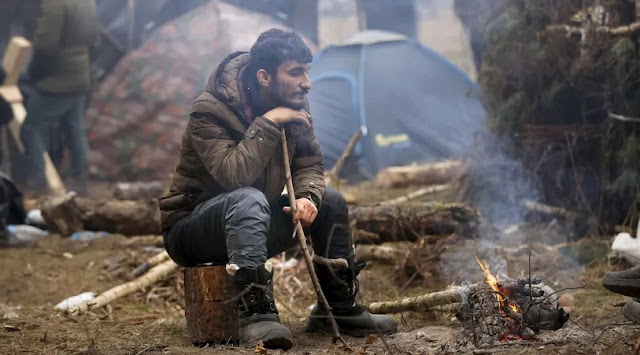 An attempt is being made to persuade migrants to return home on the border with Poland, claims the Belarusian ruler Lukashenko. The EU is preparing new sanctions.

According to the ruler Alexander Lukashenko, Belarus is trying to return migrants on the Belarusian-Polish border to their home countries. "Active work is being done to convince people to please return home. But nobody wants to return," said Lukashenko, according to the state news agency Belta. Belarus also wants "no border conflict" with Poland. This is "absolutely harmful to us," Belta quoted the Belarusian ruler as saying. The refugee crisis should not develop into a conflict.

The Belarusian airline Belavia has now imposed a flight ban on the route from Dubai to Belarus for people from Syria, Iraq, Afghanistan and Yemen. Belavia announced that the move was made at the request of the United Arab Emirates. Lukashenko said Belarus could also accept an offer from the city of Munich to fly the refugees to Germany with Belavia if Poland did not provide a "humanitarian corridor".

"We will send them to Munich with our own planes if necessary." Organizing a "refugee movement" through Belarus would be more expensive for his country, he has no intention of doing so.

Meanwhile, the Iraqi government has announced the first flight to return migrants to the Belarusian-Polish border. Iraqi citizens could return to their homes on Thursday on a "voluntary" basis, Foreign Office spokesman Ahmed al-Sahaf said on Iraqi television. The Iraqi authorities have "registered 571 Iraqis" in the border area who have agreed to voluntarily return to their homeland.

The private Syrian airline Cham Wings had previously suspended its flights to Belarus due to the refugee crisis. The Turkish government had banned people from Syria, Iraq and Yemen from traveling to Belarus. Air traffic between Baghdad and Minsk had already been suspended in August.

The foreign ministers of the European Union are also planning to increase the pressure on the regime in Minsk: "We will continue to tighten the sanctions," said Foreign Minister Heiko Maas (SPD) before consultations with his EU colleagues in Brussels. The EU foreign affairs representative Josep Borrell also announced a new package of sanctions.

Maas called "tough economic sanctions inevitable" . According to EU diplomats, the foreign ministers want to adopt a new regime of sanctions that will criminalize the "instrumentalization of refugees" and the smuggling of migrants for the first time. According to Borrell, the new punitive measures are intended to affect airlines, travel agencies and other responsible parties who support Belarus.

Maas said that there was "no sensible alternative" to the "road of hardship", as the Belarusian ruler Alexander Lukashenko had not yet shown himself to be willing to give in. "We are still a long way from reaching the end of the spiral of sanctions."