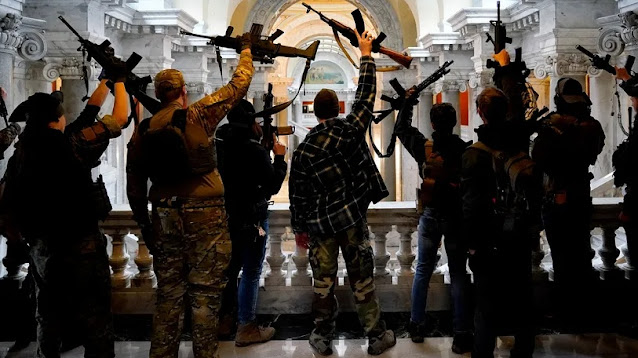 The then 17-year-old Rittenhouse killed two people and was acquitted of self-defense. It is not his acquittal that is scandalous, but the system.

It's easy to forget. To see the US President traditionally pardon turkeys and slowly prepare for Thanksgiving with the family. Undisturbed by politics, injustices and social tensions, which after all are easier to suppress with a Joe Biden instead of a Donald Trump in the White House. But the Kyle Rittenhouse case brings back in the USA what was still the reality on the streets of many American cities last summer and what should not be suppressed.

Protests broke out in Kenosha in the US state of Wisconsin in mid-2020 after the black Jacob Blake was shot several times in the back during a police operation. Just a few months earlier, George Floyd had been brutally killed by a police officer in Minneapolis. Anger, frustration and pain over the ongoing structural racism in the country were openly shouted out. " I can't breathe", the last words of George Floyd. But the frustration of one always meets the frustration of the other in America today.

Storm On US Capitol: "QAnon Shaman" Sentenced To Three And A Half Years In Prison

Kyle Rittenhouse was one of those who, he and his defense say, went to Wisconsin from neighboring Illinois with the best of intentions to protect other people's property from looted during the anti-racism protests in Kenosha. With him he had an AR-15, a semi-automatic assault rifle. With this he shot two unarmed men and injured another armed man.

His defense turned it into a case of self-defense, she had the legal basis for it. In Wisconsin, the right to use a weapon is granted when it is reasonably justified to do so. The prosecution had charged Rittenhouse with, among other things, murder in two cases. The fact that the jury now voted for an acquittal is not a legal scandal. The task of the jury is to decide on the basis of the existing laws and the facts presented to them in a procedure.

The scandal is that a 17 year old in the United States can openly go to a demonstration with a semi-automatic rifle so that people will kill and not be prosecuted. That is alarming. Reasons for this are also the gun laws in the federal states as well as the design of the regulations for self-defense, just think of the Trayvon Martin case from 2012. And we have to talk about how white such a jury is and how independent lay people or judges still are can be in today's polarized United States.

It is unlikely that these laws will change. Because they serve the right America. Vigilante justice is almost glorified as martyrdom. It is defense of one's own views and of America's upright and "right" America from this point of view by all means. These are their messages. They are "white supremacists" , radical evangelicals, but also millions of staunch Trump supporters. He legitimizes their means, he uses all irrational fears of the ruin of his own life and values ​​for himself.

"We are about to defeat the radical left, the Marxists, the anarchists, the agitators, the looters and people who in many cases have absolutely no idea what they are doing." That's what Trump said as President in his national holiday speech on July 4, 2020 . When the country threatened to break apart from its racism and structural economic inequalities. After the verdict against Rittenhouse, Joe Biden called on people to protest peacefully if they did so -  in large parts it remained calm.

Trump had no interest in reassurance, or unity, either as president or now that he is directing the Republican Party according to his will from Florida. Trump celebrated the acquittal for Rittenhouse and added in one of his emails to his followers: "And by the way, if that's not self-defense, then it's nothing!" Not really subtle subtext: Look, keep it up, it's legitimate. Donald Trump and the radical right in the country want the uproar. It is their means of power.