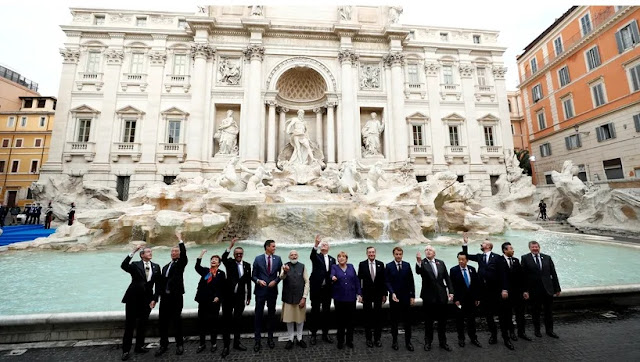 The G20 states are sticking to the Paris Agreement at the end of the summit. Experts criticize the final report. Times and goals are imprecise and watered down.

The 20 largest economic powers ( G20 ) have committed to complying with the Paris Climate Agreement. According to information from the German Press Agency, the final communiqué of the G20 summit in Rome states that the G20 states are still committed to the 2015 targets of keeping global warming "well below two degrees and pursuing efforts to limit it to 1.5 Degree limit ". On the other hand, it remained unclear what specific measures the federal states intend to take in order to achieve the goals.

Activists had hoped for a strong signal from the G20 for the world climate conference, which began this Sunday in Glasgow. The group of economic powers plays an important role because it is responsible for around 80 percent of global greenhouse gases.

Activists were disappointed with the draft. While at the beginning the year 2050 should be set for "net zero emissions of greenhouse gases or carbon dioxide neutrality", there is now only general talk of "up to or around the middle of the century". Netto zero means that only as many emissions are emitted as can be bound.

The withdrawal was apparently out of consideration for China and Russia, which do not intend to do so until 2060. India does not want to commit itself. There was also no longer any agreement on "immediate action", as it had been called in an initial draft. There is now less urgency about "meaningful and effective action".

A coal exit was not even mentioned directly. The commitment to phase out investments in coal-fired power plants was also not very specific. If that originally happened "in the 2030s", the year was missing in the final communiqué. Now the exit is only being considered "as soon as possible". Here, too, consideration could have been given to China or India, which rely heavily on coal for their electricity generation and are difficult to meet when required. However, the G20 declared that it would no longer use public funds to support the construction of coal-fired power plants abroad by the end of this year.

Even a reference to the "alarming reports" of the Intergovernmental Panel on Climate Change, which had warned of the dangers of global warming, was weakened in the final text with "recent reports". An initial formulation to strive for a "largely carbon dioxide-free power supply" in the 2030s is also missing. Rather, there is a general desire to expand clean energies. The goal of pledging around 100 billion US dollars in aid to poor countries has also been postponed, according to the communiqué.

Heads of government are satisfied with the resolutions

"I am leaving Rome with unfulfilled hopes, but at least they are not buried," wrote UN Secretary General António Guterres about the final statement on Twitter. Italy's Prime Minister Mario Draghi said he was proud of the result, "but we have to keep in mind that this is just the beginning," he added. The commitment of the G20 countries to the 1.5-degree target and other climate protection measures is not just a matter of "blah," said Draghi, referring to the Swedish climate activist Greta Thunberg , who in September had decades of inactivity for the international community "Blabla" had accused of climate protection.

French President Emmanuel Macron also spoke of a success. Despite many divisions between nations, there has been progress, he said. At the same time, he admitted that further efforts were necessary to achieve the Paris climate target. Now the entire focus is on getting China and other emerging countries as well as Russia to make additional efforts to keep going in the right direction, Macron said.

Chancellor Angela Merkel (CDU) assessed the resolutions as a "good signal" for the world climate conference in Glasgow. The fact that the G20 have jointly committed to the Paris Agreement for the first time since 2016 is a "very, very good result". "The G20 made a constructive contribution today," said Merkel. In addition, she described the decision that the G20 states want to phase out the international financing of coal-fired power plants from next year as important.

Federal Finance Minister Olaf Scholz (SPD) was also satisfied with the climate decisions in Rome. "I am firmly convinced that you can see here that the world is moving in the right direction," he said at a joint press conference with the Chancellor: "But we are still a long way from reaching our goal."

Oxfam expert complains about a lack of obligations

"The G20 summit should have been a major step forward for the UN world climate conference COP26 in Glasgow," said climate expert Jan Kowalzig from the development organization Oxfam. "That didn't work." The G20 had failed to recognize the inadequacy of its self-commitments under the Paris Agreement and to commit itself to "urgently needed, immediate improvement".

"Even Germany and the European Union are still not ready to do their fair share," said Kowalzig. The world is currently heading for a catastrophic warming of 2.7 degrees compared to the pre-industrial age, although a maximum of 1.5 degrees is considered the critical threshold. It shouldn't be improved in five years, warned Kowalzig: "The planet is on fire - we simply don't have the luxury of further delays."