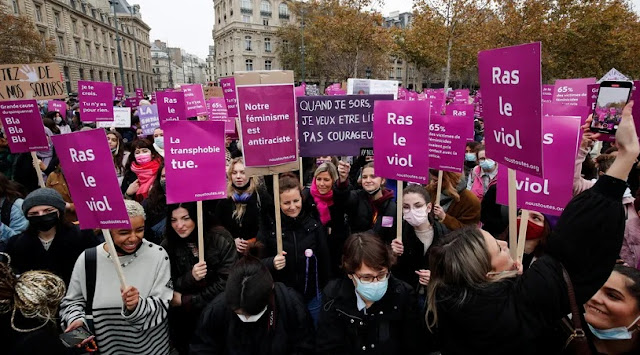 Demonstrators are calling for the French government to take action against domestic violence. In France, an average of one woman was killed every three days this year.

Thousands of people took to the streets in Paris against violence against women and discrimination. According to the organizers, around 50,000 demonstrators took part in a protest march through the city center. The police reported 18,000 participants. They called on the government to take further measures against domestic violence and the high number of so-called femicides - killing women because of their gender.

The demonstrations are part of a worldwide week of action on International Day for the Elimination of Violence against Women, which will be celebrated next Thursday, November 25th. The feminist collective #NousToutes (we all) and around 60 clubs, unions and political parties called for the French protests.

Green presidential candidate Yannick Jadot called for more funds for training and emergency shelter. "It is no longer possible to tolerate this violence against half of humanity," he said at the rally.

Protesters are calling for more accommodation for abused women

On the other hand, the Minister for Equality, Elisabeth Moreno, defended the measures already taken by the government to protect women, such as the creation of more emergency shelters, training for police officers and emergency telephones for women who have been victims of violence. "Every femicide is one femicide too many, but you can see that these measures are beginning to bear fruit," she told radio station Europe 1.

In the opinion of the rally participants, this is not enough. They called for more housing for women fleeing their violent partners. According to a report published on Thursday by the women's foundation, around 40 percent of the refugee women cannot find accommodation and only twelve percent are given a place where they also receive psychological and legal support.

In similar protests two years ago in the French capital according to the organizers 100,000 people took to the street; the police spoke of 35,000 demonstrators at the time.