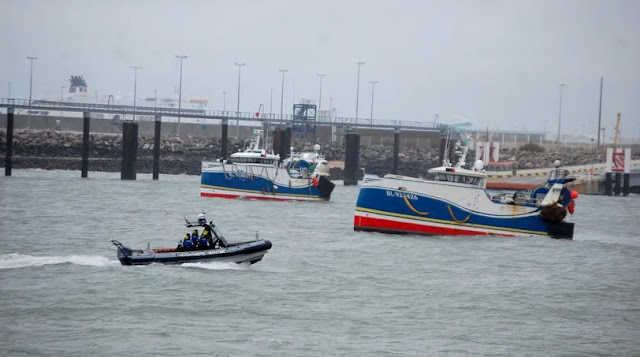 In the dispute over fishing licenses between France and Great Britain, French fishermen have blocked ports. With this they want to prevent exports to Great Britain.

French fishermen have temporarily blocked several ports and the access to the Channel Tunnel in Calais in the dispute with Great Britain over the issue of fishing licenses. The ferry traffic was interrupted for an hour at a time.

The ports of Calais, Saint-Malo and Ouistreham were affected on Friday. When the access to the terminal for the railway channel tunnel was blocked in the afternoon, trucks jammed in the motorway lanes.

"We are blocking exports, everything that comes from France and the European Union to England, above all to reach the British people so that they understand what is going on here," said the regional chairman of the fisheries association, Olivier Leprêtre.

"Since January 1st, the British have had access to the European market and we have no access to water, as was signed in the contract."

The background to the protest is a dispute over fishing licenses for French fishermen off the Channel Islands of Jersey and Guernsey, which are under the British Crown. The islands are much closer to the French coast than to the English one.

Since Britain left the EU at the beginning of the year, French fishermen have had to apply for licenses to fish there.

Because applications were rejected, France accuses Great Britain of granting too few fishing permits and thus not adhering to the Brexit agreements. The UK government rejects this.

It is about a few dozen boats that have not received a license due to a lack of documents.