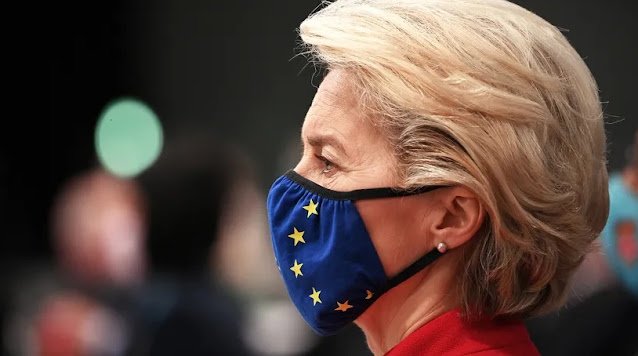 From visas to taxis to the border: the EU accuses Belarus of organized migration. The Commission intends to sanction the travel companies involved in this in the future.

In the refugee dispute with Belarus, EU Commission President Ursula von der Leyen spoke out in favor of sanctioning options for travel companies. The EU Commission is proposing a blacklist for all transport companies involved in human trafficking and human smuggling, said von der Leyen in the European Parliament in Strasbourg.

The legislative proposal had been submitted to the European Parliament and the member states.

In its organized migration strategy, Belarus is "specifically relying on the complicity of tour operators and their middlemen," said von der Leyen. There are specialized travel agencies that offer migrants everything from visas to flights and hotels to taxis to the border.

Specifically, the companies involved could threaten to lose their permission to offer their services, refuel or maintain their means of transport in the EU.

The right of passage or overflight could also be suspended, as the EU Commission announced. The EU states and the European Parliament still have to negotiate the proposal.

According to the commissioner responsible for migration, Margaritis Schinas, imitators of the Belarusian ruler Alexander Lukashenko and their helpers could also be prosecuted with the planned sanctions . The proposal is a clear message to everyone "who is considering taking part in such activities," said Schinas. The EU accuses Lukashenko of targeting migrants to the borders of the member states Poland, Latvia and Lithuania in order to retaliate for sanctions.

EU Council President Charles Michel also specified details of a new package of sanctions against Belarus that the foreign ministers of the member states launched a good week ago. According to Michel, the Belarusian airline Belavia will no longer be allowed to lease aircraft from airlines in the EU.

The acceptance of the sanctions list is imminent, said Michel. The new sanctions are intended to affect airlines, travel agencies and other responsible parties involved in smuggling through Belarus. The list of those affected could be officially adopted in the coming week.

Refugee Crisis | Escalation Of Violence On The Polish-Belarusian Border

Meanwhile, Belarus says it has continued to return migrants from the border region with Poland. 118 people left the country on Monday via the capital's airport in Minsk, said a representative of the Interior Ministry, according to the state news agency Belta. Another group should follow on Tuesday.