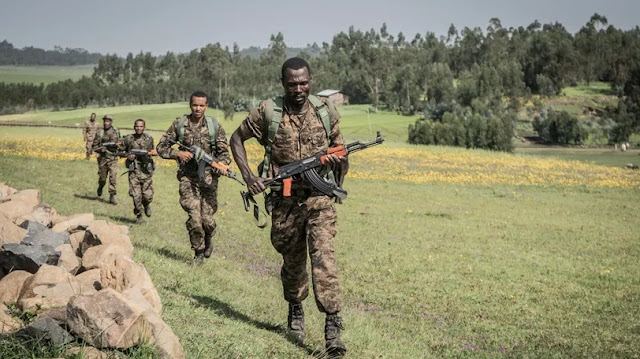 The TPLF is said to have killed more than 100 young people while taking a city. People from Tigray Province are arrested in the capital, Addis Ababa.

The Ethiopian government has accused the rebel group TPLF of a massacre in the northern region of Amhara. TPLF fighters literally executed over a hundred young residents of the strategically important city of Kombolcha, the government in Addis Ababa announced , without giving any further details. The TPLF initially did not respond to requests for comment. It is unclear whether those killed were fighters or civilians.

The rebel group from the Tigray conflict region bordering Amhara reported the capture of Kombolcha and the nearby city of Dessie at the weekend. If their information is confirmed, it would be a severe blow to Prime Minister Abiy Ahmed's government. The government said on Sunday that fighting was still going on in both cities.

Acts of war for almost a year

Kombolcha residents reported heavy night fighting on the city limits that lasted until early Monday mornings. Dessie residents could not be reached. The information from the rebels and the government can hardly be verified by an independent party, as communication is largely interrupted and the area is inaccessible to journalists. The Amhara administration on Sunday ordered all government agencies to cease their regular work and put all energy and money into the fight called for by Prime Minister Abiy.

The conflict between Abiy's government and the TPLF , which dominated Ethiopia for 25 years, has lasted for almost a year. Ethiopian government forces attacked the TPLF, which ruled Tigray, in November 2020, in response to TPLF attacks on army positions, according to government reports. Leading members of the military defected to the TPLF after Abiys came to power, which enabled the rebels to achieve great success very quickly. The sometimes fierce fighting has now spread to neighboring regions such as Amhara.

Dessie is located around 400 kilometers north of the capital Addis Ababa. Thousands of internally displaced persons from Tigray live in the city. Kombolcha is a little further south. The latest rebel offensive has sparked speculation that the TPLF is marching on Addis Ababa. This was rejected by a TPLF spokesman. The capture of the two cities gives the rebels access to one of the main highways into the capital, Addis Ababa. A spokesman for the Oromo Liberation Army (OLA), allied with the TPLF, also spoke on Twitter of the takeover of two more cities, Kamise and Sanbate, which are on the same motorway.

In the capital, however, the authorities are nervous. There, security forces arrested numerous people from Tigray. Prime Minister Abiy Ahmed also accused unspecified foreigners on Monday evening of supporting the People's Liberation Front TPLF. In the Wollo region in particular, they were increasingly involved in the fighting. Abiy called in a speech to members of the government to "fight back".

Almost two million people have been displaced by the fighting so far. There have been repeated reports of atrocities, including massacres and mass rape. Tigray is largely cut off from the rest of the world. The supply situation is considered catastrophic , according to UN data, 400,000 people in Tigray alone are suffering from hunger.