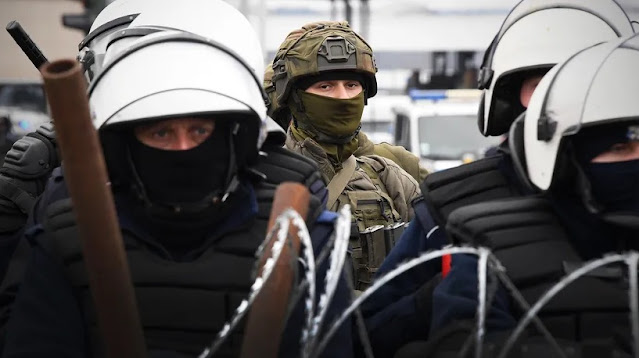 Migrants are said to have thrown stones at security forces on the border between Belarus and Poland. They used water cannons - despite the freezing cold.

Polish security forces used water cannons against migrants on the border with Belarus. The people waiting at the Kuźnica-Bruzgi border crossing on the Belarusian side  threw stones at the border guards beforehand, according to video footage from the security authorities. A spokesman for the Polish police said the people had been equipped with fire grenades and tear gas from the Belarusian side. According to unconfirmed reports, tear gas was also used by the Polish side.

The Defense Ministry in Warsaw spoke of an "attack by migrants" at the border crossing. An officer was therefore hit by a thrown object and seriously injured. He was taken to hospital with a suspected fracture of his skull.

Poland's border protection agency released video footage showing a water cannon aimed across the border at a group of migrants in a makeshift camp in freezing temperatures. The Ministry of Defense said Belarusian soldiers tried to destroy the fence along the common border. The Interior Ministry released a video allegedly showing migrants attempting to tear down a border fence. According to official information, Poland has now stationed more than 20,000 security guards in the region.

There is no way to independently verify what happened. There is a state of emergency in Poland designed to keep reporters and human rights activists out of the border area. In Belarus, too, journalists are severely restricted in their work; only a few report directly from the border.

The Polish parliament is expected to deal with a legislative proposal on Tuesday to regulate the freedom of movement of citizens in the border area with Belarus after the state of emergency has ended at the end of the month. The state of emergency was imposed in early September when large numbers of migrants from the Middle East tried to get from Belarus to Poland. The EU accuses the authoritarian Belarusian ruler Alexander Lukashenko of targeting migrants in retaliation for sanctions and smuggling them on to Poland. Belarus rejects this.

Meanwhile, the EU called on airlines to stop bringing Syrians and Iraqis to Belarus. The EU foreign ministers agreed on new sanctions against Belarus on Monday, which will also affect airlines, travel agencies and other alleged participants in the suspected smuggling.

"The way to the European Union does not lead through Belarus", said the EU foreign affairs representative Josep Borrell. The European borders are "not fully open". Access is only available through official border crossings, with a visa or an asylum application, he added.