Belarus And Russia Hold Military Exercises Near The Polish Border 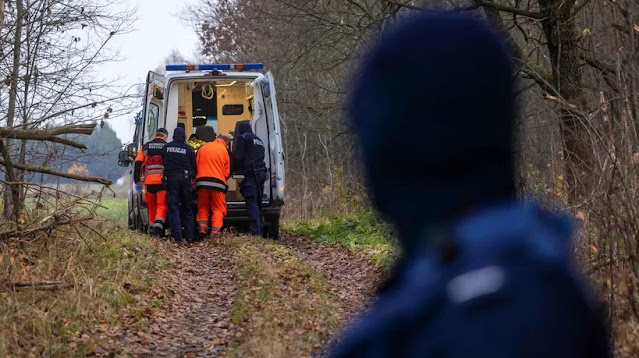 Because of "increased military activity", Russia and Belarus are sending planes and paratroopers to the EU's external border. Two soldiers died in the exercise.

In the midst of the confusing situation surrounding thousands of stranded migrants, Belarusian and Russian soldiers are holding an exercise near the Belarus- Poland border . The Ministry of Defense in Minsk justified the maneuver on Telegram with an "increase in military activity" at the border. A "joint tactical battalion group" with paratroopers from both countries is holding the exercise in the Grodno region in western Belarus, it said.

According to the Russian Defense Ministry, the paratroopers were supposed to jump from an Ilyushin Il-76 heavy transport aircraft in the Belarusian region of Grodno. According to Russian agency reports, the ministry announced that it was a surprise mission to "check the combat readiness" of the troops.

Thousands of migrants, mainly from the Middle East, are currently stuck at the EU's external border in Poland at temperatures around freezing point . The EU accuses Belarusian ruler Alexander Lukashenko of deliberately smuggling migrants to the borders of the EU states Latvia, Lithuania and Poland in retaliation for sanctions. Poland has already deployed 15,000 soldiers in the area because of the crowds.

According to the UN refugee agency UNHCR, aid organizations got access to the refugees on the Belarusian side for the first time during the week. Humanitarian aid workers from the United Nations and representatives of the International Organization for Migration (IOM) were able to bring first emergency aid to a makeshift camp on the Belarusian side at the Kuźnica-Bruzgi border crossing on Thursday. The Belarusian Red Cross supplies necessary goods such as blankets and warm clothes for children.

The priority now is to prevent the death of more people and to persuade the authorities to take the migrants to safe places where they can find appropriate help and advice, the UNHCR said. Among other things, the employees informed the stranded about their options, for example, to apply for asylum in Belarus. However, some asylum seekers and refugees may also have reasons for entering the EU, for example because family members are already there. Another option is voluntary return through a safe and legal route with the help of the IOM.

The EU had already announced at the beginning of the week that it would impose further punitive measures against Lukashenko. The acting Federal Foreign Minister Heiko Maas (SPD) told the Rheinische Post and the Bonner Generalanzeiger that at the meeting of EU foreign ministers on Monday in Brussels, the sanctions would be extended to people "who indirectly or directly" supported the smuggling of migrants to Belarus. Maas also did not rule out sanctions against participating airlines. EU diplomats had already made a similar statement on Tuesday.

"We have to ensure that this chain of smugglers is broken," Maas told the newspapers, referring to the migration to the EU's eastern external border, which is apparently controlled by the Belarusian authorities. There would be an extensive list of sanctioned individuals very soon.

Seehofer is planning a trip to Poland

The acting Federal Minister of the Interior Horst Seehofer (CSU) wants to travel to Warsaw in the coming days. This was reported by the Bild newspaper. A specific date is currently being agreed with the Polish side, said a spokesman for the Ministry of the German Press Agency.

In a 45-minute phone call with his Polish counterpart Mariusz Kamiński, Seehofer thanked him for the immense efforts at the border protection, wrote Bild . He reaffirmed that Germany stands ready to support Poland in protecting the EU's external border, as well as for possible humanitarian aid on the ground. "We must not allow ourselves to be divided in the EU by perfidious political power games," said Seehofer. "The protection of the external border is in everyone's interest and Poland is acting in the interests of Europe. We stand by Poland's side."