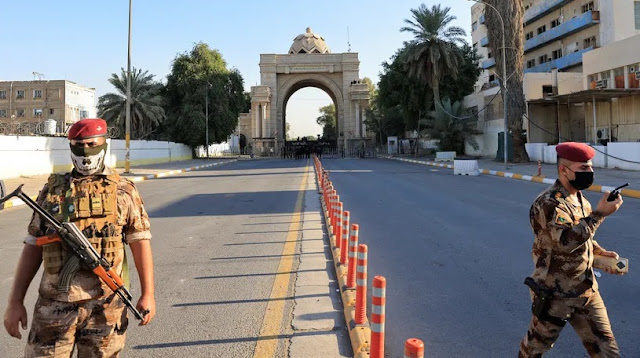 Explosions and gunfire broke out in central Baghdad. According to the military, the head of government escaped the attack unharmed.

A drone loaded with explosives attacked the residence of Iraqi Prime Minister Mustafa al-Kadhimi in the fortified "Green Zone" of Baghdad. The prime minister escaped the attenate attempt unharmed, said the Iraqi military. The emergency services took "the necessary measures," it said in the message.

Two government officials confirmed to the Reuters news agency that Kadhimi's residence had been hit at least once. The prime minister is safe. Al-Kadhimi wrote on Twitter that he was fine. He urged all Iraqis to keep calm. So far, no group has claimed responsibility for the attack.

Western diplomats in the "Green Zone" said they heard explosions and gunfire. Supporters of heavily armed groups close to Iran had repeatedly demonstrated near the "green zone" in recent weeks. They protested against the result of the last parliamentary election, in which their parliamentary power was curtailed.

Former intelligence chief Mustafa al-Kadhimi formed a government in May after a month-long power struggle. According to official information, the party of the Shiite cleric Moktada al-Sadr won the parliamentary elections in October by a clear margin. However, one of the most influential pro-Iranian politicians in Iraq, Hadi al-Amiri, did not recognize al-Sadr's election victory.

Since 2003 parliamentary elections have been followed by difficult negotiations to form a government, which can drag on for months. The Shiite majority in the population has provided or dominated all governments since the US-led invasion in 2003.