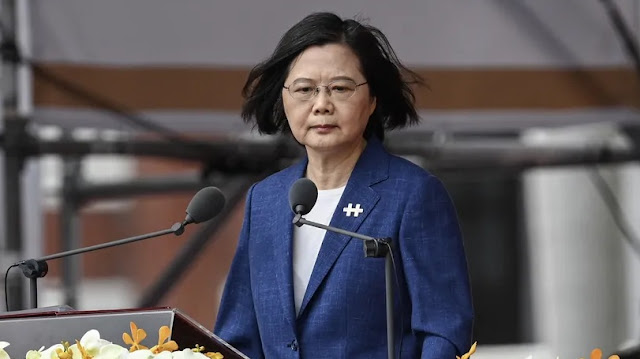 Taiwan's government has rejected Chinese calls for "reunification". Tsai Ing-wen emphasized that the island republic would expand its defense.

Taiwan's Prime Minister Tsai Ing-wen is adamant about threats from China. "There should be absolutely no illusions that the Taiwanese people will bow to pressure," said Tsai Ing-wen in a speech on Sunday's national holiday in Taipei. The island republic will expand its defense to ensure that no one can force Taiwan to take the route that Beijing has mapped out. This offers "neither a free and democratic life, nor sovereignty" for the 23 million Taiwanese.

The president responded to the call by China's state and party leaders the previous day to join the Communist People's Republic. Beijing threatens a forcible conquest of Taiwan, which is seen as an "inseparable part" of the People's Republic. "The complete reunification of our country will and can be achieved," affirmed Xi Jinping. Association by "peaceful means" would best serve the nation. However, he warned that a split in Taiwan would "have a bad ending".

Taiwan's president described relations with China as more complicated than ever in the past seven decades. At that time, the Chinese national Kuomintang troops fled to the island after the defeat in the civil war against the communists. Established in the 1911 revolution after the fall of the Qing Dynasty, the Republic of China continues to exist on Taiwan. Both sides celebrated the 110th anniversary of the 1911 revolution on Sunday.

Taiwan hopes that relations with China will ease off and will not act rashly, assured President Tsai Ing-wen. "We call for the status quo to be preserved and we will do everything we can to prevent the status quo from being changed unilaterally." After Chinese military pilots had increasingly penetrated Taiwan's Air Defense Identification Zone (ADIZ) in recent weeks, local media reported that another military aircraft had been sighted and warned on Sunday morning.