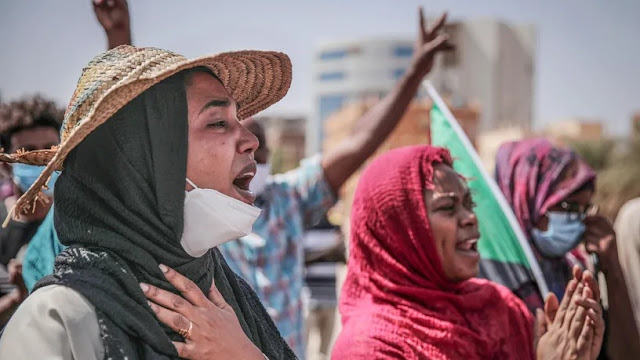 During mass protests in the city of Omdurman, security forces again fired at demonstrators. The United Nations called on the military leadership to exercise restraint.

In Sudan, after the military coup almost a week ago, hundreds of thousands of people took to the streets to protest against the new rulers. They are calling for the restoration of the civilian-led government and a return to the "path of democracy". As in the previous days  , gunmen shot at the demonstrators. According to the National Medical Committee, at least two people were killed in the city of Omdurman.

There were also major demonstrations in the capital region and the city of Bur Sudan on the Red Sea. In the capital, Khartoum, the military has demonstrated strength with a massive presence since the morning. Rescue workers blocked bridges that connect the capital with neighboring cities. They also set up checkpoints on main roads where pedestrians and drivers were randomly searched. The Internet and telephone connections were largely paralyzed. According to doctors, at least eight people were killed and 170 injured in protests in the days before. A US official even spoke of 20 to 30 dead.

Before the start of the so-called million march, the USA and the United Nations had urged the new military leadership to exercise restraint. The UN special envoy for Sudan, Volker Perthes, called on those in power to allow peaceful protests. "Destroying sidewalks, power poles, and damaging property that people have built has nothing to do with peaceful expression," said military finance minister Gibril Ibrahim. "We have learned that the putschists want to fabricate destruction to justify their excessive violence," said the Sudanese Ministry of Information, which continues to support a civilian government.

The military took power in the northeast African country on Monday. Previously, since the overthrow of long-time ruler Omar al-Bashir in 2019, a so-called Sovereign Council had taken over the business of government. It consisted of soldiers and civilians. In the past few weeks there had been conflicts within the government due to high inflation, economic problems and deep political divisions.