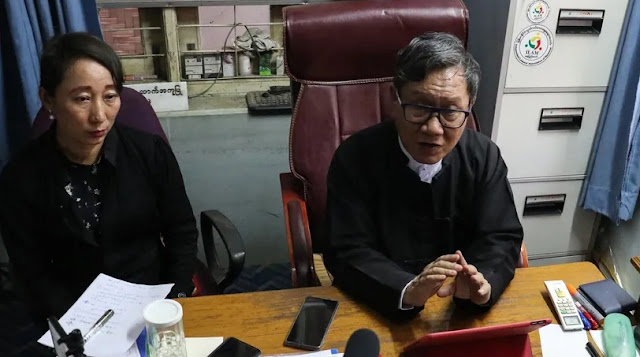 The lawyer for Myanmar's disempowered Prime Minister Aung San Suu Kyi is no longer allowed to communicate with other countries and the media. The military junta has banned that.

The military junta in Myanmar has banned the chief attorney of the disempowered Prime Minister Aung San Suu Kyi from speaking and banned him from communicating with the media, diplomats, international organizations and foreign governments. This emerges from an order that the lawyer posted on his Facebook page.

"Khin Maung Zaw's communications could upset and hurt anyone who behaves according to the law, which would also lead to unrest and destabilize public peace," it said. Khin Maung Zaw was the mouthpiece of Suu Kyi and had regularly informed the public about the progress of the various legal proceedings against the 76-year-old and about her state of health.

Suu Kyi has been under house arrest since the military coup in early February. In mid-September, for the first time, she was unable to appear in person in court in the capital, Naypyidaw, due to illness. According to her lawyer, she recently asked the judge to appear in court only every two weeks instead of every week as before, because her health was in poor health. What exactly is missing is not known.

The 75-year-old Nobel Peace Prize laureate had been accused of a number of offenses since the military coup, including corruption , possession of radios without required authorization, violating corona regulations and inciting public unrest. Long prison terms are threatened. Observers and human rights experts speak of a show trial and suspect that the junta wants to silence the popular politician in this way in the long term.