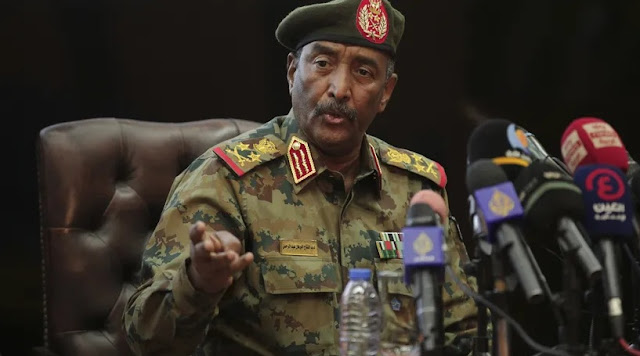 The civilian-led interim government in Sudan was overthrown by the military. Ambassadors who sympathize with the demonstrators have now, according to reports, been removed.

Shortly after the military coup in Sudan , the army leadership reportedly released the country's ambassador to the European Union and five other diplomats from their duties. In addition to the ambassador to the EU in Brussels, those in the USA, China, France and Qatar as well as the head of the Sudanese mission in Geneva were also deposed. This was reported by the Sudanese state television and the Al-Arabiya TV channel. Several ambassadors had previously condemned the coup and expressed their solidarity with the civil resistance movement that had been protesting against the putschists for days.

The military took power in the East African country with 44 million inhabitants on Monday after the situation had worsened for weeks. General Abdel Fattah Burhan announced the disempowerment of civilian members of the government and declared a state of emergency. The internet has been blocked almost continuously since then.

The ambassadors of Germany and other countries called for the reinstatement of the disempowered Prime Minister, who is now effectively under house arrest. Abdalla Hamdok is still recognized as head of government and a meeting with him is demanded, it said in a statement by the EU delegation and the embassies of Germany, France, Great Britain, the USA and other countries on Wednesday. Illegally detained ministers and civil society representatives should be released immediately.

The Sudanese ambassadors to China, France, Qatar and five other countries issued a joint statement on Tuesday condemning the coup and the "illegal detention" of members of the government. The Sudan Tribune quoted  the letter as saying that it supports "the striving of the Sudanese people for freedom, peace and justice" and the transition to permanent democracy . The Sudanese ambassador to the USA made a similar statement afterwards.

US Secretary of State Antony Blinken telephoned Mariam al-Mahdi, Secretary of State in Hamdok's cabinet, and offered her US assistance for a non-military transition to democracy. The US government had previously suspended financial aid of US $ 700 million for the country in the face of the military takeover. Unneeded employees of the US embassy in Khartoum have since been approved to leave the country.

The World Bank has also suspended its payments to Sudan for the time being, and the German government and the EU have threatened to take this step. The African Union put the country's membership on hold until the disempowered interim government under civilian leadership is restored. And tens of thousands of angry people went to the barricades on the streets of Khartoum, feeling that their hopes for democracy and reforms had been cheated.

Rich in oil, but impoverished

Sudan had been ruled by Omar al-Bashir for almost 30 years. In April 2019, the long-term ruler was driven out of office after mass protests and a military coup. As a result, the military and the civil opposition agreed on a joint transitional government that would pave the way for elections. Numerous reforms followed, which enabled the oil-rich but impoverished country to free itself from decades of isolation. The coup now threatens the loss of these hard-won achievements, to which broad sections of the population are vehemently resisting.

"The transitional government has now lasted over two years, but that wasn't a love wedding," said the UN special commissioner for Sudan, Volker Perthes, in the Süddeutsche Zeitung. "The military and civilian politicians have made a rational decision to work together to put the country on the path to internal peace after 30 years of dictatorship and almost six decades of civil war." This partnership was full of conflicts from the start, said the former director of the Science and Politics Foundation (SWP). "We as the United Nations tried to de-escalate through diplomatic means, but we were unsuccessful."