KANDAHAR: At least 16 people were killed and 32 others injured in a blast at a Shia mosque during Friday prayers 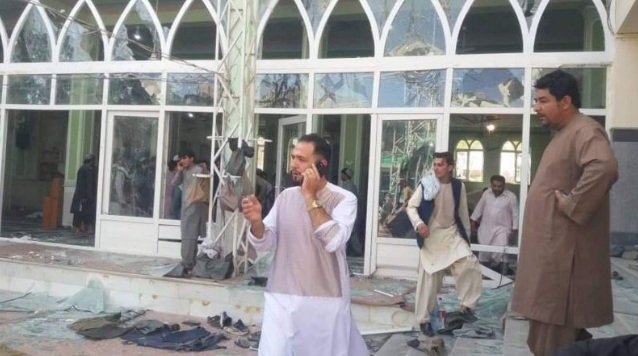 A bomb blast near a Shi'ite mosque in the Afghan city of Kandahar during Friday prayers has killed at least 16 people and injured 32 others.

The bomber struck shortly after noon in front of a mosque. Qari Saeed Khosti, a spokesman for the Taliban government's interior ministry, said authorities were gathering details about the blast.

The nature of the blast has not yet been determined, but it is being speculated that it was a suicide bombing.

According to Tolo News TV, the blast took place during Friday prayers in Kandahar City's Police District One. According to a report published on the news channel's website, "eyewitnesses say that the death toll is very high. So far no official figures have been released.

No group has claimed responsibility for the attack. A suicide bomber killed at least 50 people and wounded more than 100 during a Friday prayer gathering at a Shia mosque in the Afghan city of Kunduz October 8. The so-called Islamic State militant group claimed responsibility for the attack. Islamic State has targeted Afghanistan's Shiite community several times in the past. Bodies and debris could be seen at the Syedabad Mosque in Kunduz in images that went viral after the suicide attack. The Islamic State suicide bomber blew himself up as people gathered at a mosque for Friday prayers. More than 300 people were inside the mosque during the attack in Kunduz.

Pakistan condemned the attack in Kunduz and said, "The government and people of Pakistan stand in solidarity with their Afghan brothers. We extend our deepest condolences to the families who lost their loved ones and hope that the injured will recover soon.

Recent attacks by the Islamic State of Khurasan

No group has claimed responsibility for the attack in Kandahar, but the Islamic State of Khorasan has been involved in most recent attacks on Afghanistan's Shia community.

The Islamic State of Khurasan, a local branch of the so-called Islamic State, is opposed to the Taliban, and has carried out a number of recent bombings, most of them in the eastern part of the country.

IS targeted a funeral prayer in Kabul last week attended by several senior Taliban leaders. There were also reports of casualties in the attack. The group has also claimed responsibility for several small-scale attacks in the eastern provinces of Nangarhar and Kunar. These areas of Afghanistan used to be strongholds of IS.

The Taliban have said in the recent past that they have arrested dozens of IS members from Afghanistan and it is believed that many people have been killed on suspicion of links to the group. The public doesn't care.

After the Taliban took over Afghanistan in August, many Afghans hoped that the Taliban would bring in a dictatorial government but also bring relative peace to the country. But Islamic State has emerged as a major threat to the Khurasan Taliban's promise of peace.